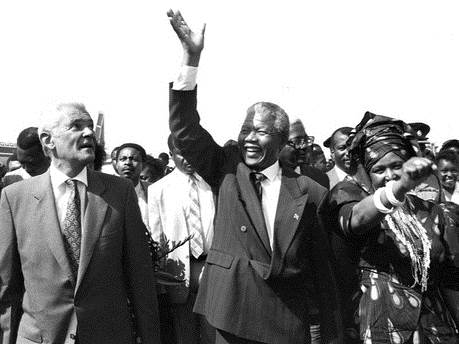 It was a day I will never forget. Nelson and Winnie Mandela’s momentous visit to Jamaica on July 24, 1991.

Probably the most incredible moment of my journalism career.

The day I shook hands with the one man who has inspired me all my life I felt my heart stop.

I remember living in fear for months after he was released from prison on February 11 the year before, after 27 gruelling years.

His fight for the freedom of his South African people and black people worldwide was not dampened in the least by his time in prison, and I feared so much for his life.

When Prime Minister Michael Manley announced that the Mandelas had accepted an invitation to visit our island paradise, I couldn’t contain my excitement. Shock and awe overtook me!

He had so many places to go, so many people to see. He had a huge struggle on his hand and I thought Jamaica would be the last place on his mind.

Maybe after South Africa was totally free and the brother could then relax in a nice home with his wife, children and grandchildren, after years of fighting, struggling, arrests, harassment and oppression. Maybe then he would come. But surely not now.

Winnie in the flesh

Whatever happened, I had to be part of my newspaper’s team to cover that visit. And, thankfully, I was assigned to the functions Winnie was scheduled for.

When she stepped out of the car at The Jamaica Pegasus hotel in St Andrew for the first engagement, I caught my breath. Winnie Mandela in the flesh!

‘Wow, she is beautiful,’ I thought.

I was so close I could touch her. Hands reached around me to touch her and tears begun to flow. The cameras were in a frenzy trying to capture every moment.

As we made our way from one engagement to the other, the emotions ran even higher as Beverly Manley; the then Minister of Welfare, Sports and Culture Portia Simpson; Lorna Goodison and so many others occasionally hugged Winnie as they cried together, everyone overcome with the emotions of such a historic affair.

I felt the love, warmth and compassion throughout my entire body and soul, as I fought back my own tears to concentrate on capturing it all. There would be time for that later.

“We have been all over Africa, Europe, India, Algeria, Ethiopia, America and we have yet to come across the warmth we have come across here … I am speechless,” Winnie shared, sobbing between words.

“Thank you for reminding me of those spiritual things we have forgotten in our country, especially that of love. I can assure you that you have given us the inspiration to run that mile together. Amandela! Amandela!”

The cheers were deafening.

As I spent the day with her, I was overcome with sympathy as I saw the tiredness in her eyes, face … her body. How could one person go through so much, I wondered?

At our final stop at Gordon House on Duke Street, where Winnie would meet up with her husband at Parliament, I squeezed my way through the thick crowd, hoping beyond hope to see my hero, Nelson, in person.

The deafening roar of the crowd signalled his arrival.

When I finally saw him it was as if time stood still.

Standing beside Prime Minister Manley, Nelson Mandela smiled as he waved to the excited crowd.

As they slowly walked towards the entrance where I stood, my heart felt like it would pound out of my chest.

As they got closer, somehow my hand just shot out towards him. Mandela then turned to me, smiled and took my hand. Wow!

It was as if time slowed to a crawl and sudden silence had descended. There was still maddening excitement all around, but at that moment I didn’t hear a thing.

I was literally mesmerised. The Nelson Mandela – leading freedom fighter for blacks across the world, revered and loved by everyone, my hero and champion, my inspiration for human rights and justice, the man many would die in person to see much less touch – just shook my hand!

And his hand was soooooooooo soft!

It took me some time to stop looking at my hand. I could still feel his touch for such a long time after.

It wasn’t until later when I got home that the whole emotional roller coaster of the day really hit me. And I just let go and let my own tears flow.