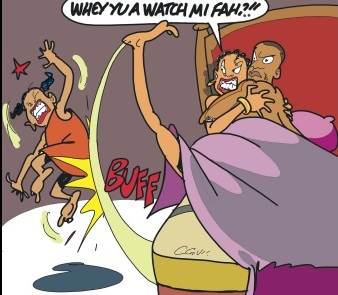 Mother accused of having sex in front of young daughter

A woman who is in a feud with the mother of her granddaughter over the child, told the Corporate Area Resident Magistrate’s Court last week that the child’s mother has been having sex in front of her young daughter and on one occasion kicked her and told her to go sleep when she realised that she was awake.

“My mother and ‘Pow’ was on the bed kissing and going on and she kick me and say go to you bed, wha you a watch me fa,” the complainant said she was told by the seven-year-old child.

The grandmother, who appeared in court on Thursday in relation to an incident in which she claimed she was assaulted by the child’s mother, said that the child lives with her, but does not want to visit her mother.

According to her, the child complains that her mother has sex in front of her and has scared her by pulling her boyfriend’s gun

As a result of what she was told, the complainant said that she spoke to the child’s mother “to be careful of what she does in front of the child”.

However, she said that the mother was not happy and sometime after, took her to court for denying her access to the child, after she had called her to see the child and was told to call her back.

As it relates to the October 18 incident, the grandmother said that she was in Papine Square, St Andrew with the child who was waiting to be picked up by her mother. When the mother arrived, she told the mother not to have sex in front of the child, at which point the mother used a broom and hit her across the face.

The accused, however, denied the allegations. She told the court that it was the complainant who first shoved her and she shoved her back and hit her with a broom after she called her “nasty gal” and made the rude comment.

Pusey then asked the complainant if she had shoved the accused and she said she did.

“I don’t know why people believe that they have a right to push people when they come up in their face, the law requires that you retreat,” she said.

She then told them that it was the child who she is most concerned about.

The grandmother was then warned not to bar the child from seeing her mother and not to sow seeds of enmity between the mother and child.

Pusey also advised the grandmother to speak with the mother in private and not to embarrass her in public and to desist from encouraging the child to inform on her mother, as what she is saying might not be true.

The mother was then ordered to pay half of the complainant’s medical bill of $4,000 and the magistrate made a no-order ruling in the case.