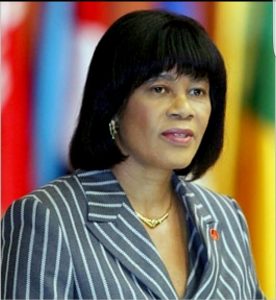 A CVM television cameraman and his family is reportedly being harassed following the recent publication of controversial comments made by Opposition Leader Portia Simpson-Miller as she addressed People’s National Party (PNP) supporters in St Ann.

The Press Association of Jamaica (PAJ), in making the disclosure a short while ago, expressed alarm at the threats being made to the cameraman and the harassment of him and his family, as a direct result of his performing his duties.

The cameraman has been receiving threatening and abusive phone calls, PAJ said in the release.

Press association President Dionne Jackson Miller said “It is ironic that this is happening even as we celebrate National Journalism Week”.

“Our colleague was doing his job. He brought to national attention comments by one of our elected representatives, the Opposition Leader no less, that sparked a national dialogue, and attracted significant criticism. This is exactly the role that media workers are supposed to play in informing the public, and we are very disturbed that his life and safety may now be at risk as a result,” she added.

The threats have been reported to the police.

“We understand that the police have been very helpful,” said Jackson Miller.

“We thank them for their efforts so far and strongly urge them to speedily complete their investigations into this matter, which is of great concern to not just the media community, but to the wider society.

“Press freedom is one of the foundation stones of any democratic society, and we reject and condemn these actions by thugs trying to intimidate our colleague. We stand with him and our colleagues at CVM, and we encourage and support him as he and his family go through this difficult time,” she said.