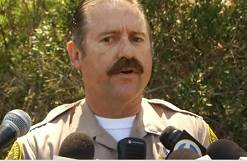 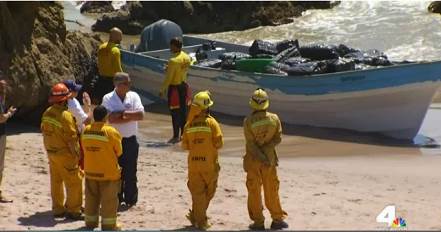 A boat loaded with bundles of marijuana — possibly more than one ton — washed ashore Monday morning on the Southern California coast.

The 30-foot boat, an open fishing boat with outboard power, was discovered near the Ventura and Los Angeles county line near Leo Carrillo State Park, about 10 miles west of Malibu. Authorities could not confirm the weight of the cargo, but estimated it weighed about one ton after viewing the boat.

The initial report regarding the beached boat was received from State Park Rangers, who noted the strong smell of marijuana and gasoline. The Rangers had already detained one subject when Los Angeles County Sheriff’s deputies arrived, but said two other individuals ran from the boat.

“When he was detained, he was trying to blend in as a regular beach-goer,” Lt. James Royal said.

That man, along with two others who were found hiding in the bushes, were taken into custody. A helicopter crew did not locate anyone in the water, according to the U.S. Coast Guard.

The seized marijuana will be transported to a Homeland Security Investigations office to be weighed and processed as evidence. Based on research, the street value of a ton of marijuana can range from $1 million to $2 million depedning on the potency and quality of the weed, according to an NBC4 report.

The panga boat was towed from the beach.

Royal said these panga boat smuggling operations often begin south of the Mexican border, but range up and down the California coast.

Read: GM Slow to Offer Fixes
The boat is the latest drug-smuggling vessel found along the shoreline northwest of Los Angeles. In September, more than 2,000 pounds of marijuana were seized and 18 people were arrested after members of the California National Guard spotted a panga boat near Arroyo Quernada Beach in Santa Barbara County. Authorities later stopped a truck that was involved in the smuggling scheme.

An estimated $4 million worth of marijuana wrapped in bundles washed ashore near Santa Barbara in March 2013. A 30-foot panga boat with about 20 fuel containers was found nearby.

Read: Gunman Opens Fire at Police Station
In December 2012, a U.S. Coast Guardsman was killed when he was thrown from a boat that was rammed by a panga boat under investigation for smuggling off the Southern California coast. Drugs onboard the panga were seized and two smuggling suspects were taken into custody.

0 thoughts on “BOAT FILLED WITH WEED BEACHED IN CALI”

153 Users Online
Back to top