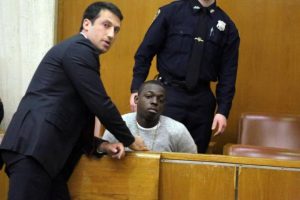 NYC PAPERS OUT. Social media use restricted to low res file max 184 x 128 pixels and 72 dpi
Jefferson Siegel/New York Daily News
Ackquille Pollard (aka Bobby Shmurda, aka Chewy) is facing weapons possession charges in separate cases in the Bronx and Manhattan, but says he was the victim in a Brooklyn arrest.

Rapper Bobby Shmurda wants to get paid by the city for an alleged false arrest on gun and drug charges by the NYPD, according to a federal lawsuit.

The “Shmoney Dance” singer, whose real name is Ackquille Pollard, claims he was hanging out at a friend’s crib on Rockaway Parkway in Brooklyn on June 3, 2014 when cops knocked on the door.

“When one of the occupants opened the door a slight bit to see who was there, Officer Douglas Corso and other police officers kicked in the door and illegally entered the residence without a search warrant,” according to the suit filed Friday in Brooklyn Federal Court.

The cops claimed Pollard tried to hide a handgun inside a couch.

Pollard, 21, claims that while the cops were allegedly ransacking the apartment, they taunted him by “chanting the lyrics to his chart-topping songs,” the suit states.

Neither the gun, nor drug paraphernalia seized from the apartment belong to Pollard, he claims.

Pollard did not file a civilian complaint with the CCRB about an illegal search, Sells said.

The gun charge in Brooklyn was eventually dismissed, but Pollard is currently facing weapons possession charges in separate cases in Manhattan and the Bronx. He is free on $2 million bail.

Corso, the only named cop in the suit, was a defendant in five other federal civil rights lawsuits going back to 2011.

Pollard claims he suffered permanent “nervous shock and mental anguish” as a result of the arrest.

One thought on “BOBBY SHMURDA SUING THE NYPD”