BORN AND BEATING THE ODDS 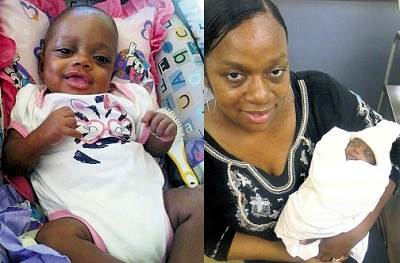 When Tabitha Campbell was born at 26 weeks and two days, she had already beaten almost all the odds. But when her lung burst three times within days, even the doctors were doubtful that the one-pound baby would make it.

What they could not see at first was the hope, rooted in the word of God, that Sheree Gunther-Campbell, and her husband, George Campbell clung so tightly to.

For seven years, as a member of the Deanery Road-based Good News Mission/International Youth Fellowship (IYF) Sheree had been instilling in young troubled men and women, the importance of strengthening their hearts through hope, in the face of utter hopelessness. Now here she was — faced with her own personal tribulation.

Although at first they did not realise it, the IYF had prepared the Campbells for those traumatic 81 days when their newborn was in intensive care at the University Hospital of the West Indies (UHWI).

Senior Manager at the IYF centre in South East St Andrew, Noel Esty, explained that one of the tenets of the movement is to help persons overcome challenges by strengthening their hearts and their resolve. “Stress doesn’t have to become distress. We focus on helping young people overcome themselves. We sit and talk to young people who have been through a lot — some of them abused, some of them it’s just poverty (and) social malaise,” Esty said.

“Young people have learnt to avoid burden and difficulty and because of that their hearts are weak, so when any form of challenge comes, people curl up, they want to run away. We push the volunteers to break through burden because we believe that’s what makes your heart strong,” he added.

The 150-volunteer strong organisation, inculcates its message of hope and strength to young people through a number of programmes including academies, which are held on Saturdays at the Deanery Road compound, where music, dance, and languages are taught. Lectures and presentations are also given by guest speakers who have met and overcome difficulties.

“We believe the foundation of wisdom is in the Bible, and that is what we impart to students, to give them something inside of their heart when everything is crumbling around them. As they see themselves changing, then you start to see a different kind of person,” Esty said.

It is this inner change that he believes can change entire communities. But Esty said that because the work of the IYF is not tangible, it has been difficult to get social development organisations and other State agencies to come on board.

Esty pointed to the fruit of the IYF’s work manifesting among young people in nearby McGregor Gardens in Rollington Town: “Their parents are amazed at how they have changed, but this is not something you can go to a board and say, well five people changed. Everybody needs to have something to show their shareholders. Our challenge is to get people who can come on board with us for the long haul. We really don’t believe in building facilities which eventually become a ghost town”.

Before she found the IYF, when she was struggling with her relationship of 12 years Sheree said that she too was among the weak-hearted. She said that she was skeptical at first. “I wasn’t searching (for a church). I was searching for somebody to help me with this man, because he was stressing me,” she laughingly recalls.

But it wasn’t long before her heart and mindset were transformed: “I was free from bondage. When I received salvation, I was so happy and thankful. God saw what I needed”.

Sheree smiled as her six-month old, now a thriving 10 pounds, makes adorable faces, while she relates how for close to 13 years, she was convinced that she could not bear a child. But roughly a year after she got married to her new love she conceived. “God allowed me to get pregnant, somehow,” she said.

Then in the summer of 2014, as the Chikungunya virus wreaked havoc on Jamaicans from all walks of life, she contracted the mosquito-borne virus. At the UHWI she was diagnosed with a blood infection caused by the virus, and torn membrane.

“They started to give injection to develop the baby’s lungs. They said the baby could come at any time,” Sheree explained. She said that her heart became filled with despair, but her family and church members would not allow it. “I wasn’t getting that (hopelessness) from any of them. I was getting the word, that this is for the glory of God,” she said.

It was not long before the doctors told her they had to take the baby. But Sheree said she insisted that she needed to consult with her family and church group. Her decision to wait until the baby came was not what the doctors wanted to hear, but she said an inner peace came over her, and she knew she was making the right decision. “My heart became really peaceful…when they came and checked, my pulse rate was down, the fever was down”, she recalled.

Labour was another struggle for Sheree. “I was in pain, I was crying and the doctor said: ‘Mrs Campbell, you have to listen to me, and what I’m saying to you, not what you’re feeling anymore. This baby has to come out, this baby cannot breathe on her own, this baby cannot push herself, because her lungs are not developed, so you have to push her out’…. I realised (then) that our mindset is what controls everything. There wasn’t any problem after that,” the new mom shared.

Tiny baby Tabitha needed oxygen right away. She was rushed to the intensive care unit, but there was no ventilator available and she was placed instead on a Continuous Positive Airway Pressure (CPAP) machine, which uses mild air pressure to keep airways open. But because Tabitha’s lungs were underdeveloped, she would not have survived for very long on this treatment, as she needed not just cleared airway, but help to actually breathe.

“When I saw the baby, I cried. I couldn’t believe that was my baby. She looked like a little frog. She was struggling to breathe, and her chest was going into a hole. She was crying and struggling. I started to cry. I said, my God, why does she have to go through this,” Sheree reflected, with a shake of her head.

After a week of tears and prayer Sheree said a ventilator was donated by a corporate company, just in the nick of time, as Tabitha could not have survived on the CPAP for much longer.

The baby was far from out of the woods, as on the seventh day, her left lung burst. The doctors advised Sheree that they would have to do surgery on her tiny baby, to fix the torn lung.

Little Tabitha’s blood count had dropped, and she needed blood. Her lung burst again, and again. Sheree admitted that as strong as she tried to be, her faith was badly shaken again. “The doctors said ‘this is not good'”, she stated, a slight tremor in her voice.

“The lungs kept bursting, because her body couldn’t fight anything. Her oxygen level kept going down, making it hard for her to breathe. She wasn’t eating, just salt and sugar, so she didnt have anything substantial in her body,” she explained.

There was another serious problem. All the successful surgeries in the world could not save the baby if they did not get some nutrients into her quickly. Sheree said the doctors told her that: “We need to find a way how to feed this baby. This baby has lived 14 days, we cannot make this baby die of malnourishment.”

That would be a serious challenge, as Tabitha had Necrotizing Enterocolitis (NEC), which occurs when tissue in the small or large intestine is injured or begins to die. This causes the intestine to become inflamed or, so that it can no longer hold waste, and causes waste and bacteria to enter the baby’s bloodstream. “If they fed her by mouth this could make the stomach swell, burst the intestines, and kill her,” Sheree explained.

The other option was a feed line either through her groin or neck. The doctors opted to go in through the groin and after another successful surgery, Tabitha began to receive her nutrients. “That’s how she started to progress. She had infections still, but she was progressing. They didn’t see any evidence like this baby wouldn’t make it anymore. They were very hopeful,” Sheree said.

Through all of this, Sheree testifies, the word of God and faith, when everything pointed to death and disaster, kept her hopeful. The doctors too, found hope in baby Tabitha, who miraculously, was still alive and fighting. “They said they find hope in this baby, because a baby was born at six months like her, lived three days, the lung burst, and the baby died,” Sheree said.

As traumatic and frightening as those 81 days were for Sheree and George, they both believe everything that happened was meant to strengthen them, and allow them to experience the hope they had been instilling in young people.

“God provided doctors to monitor her very carefully. We learn that God is real, but we never actually learn to experience truly God,” Sheree said, matter of factly.

“This is the heart that IYF is instilling in young people — the unseen — you can’t trust yourself. That is how God works. God isn’t working based on how we think and how we feel. This has become a miracle inside of everybody who meets this child’s life,” she added.

While the managers and volunteers lobby for partnerships with government and NGOs, in the meantime they are determined that the work must go on. The facility and its programmes are sustained by donations, and funds from their own pockets.

The IYF, now in 86 countries, is a faith-based global network of partner organisations working together for positive youth development at the community and national level.

“We emphasise true volunteerism. We don’t do fundraisers. We believe that God is true, we pray, and we get whatever we need from God. Prayer works because God is real,” Esty stated.

0 thoughts on “BORN AND BEATING THE ODDS”

115 Users Online
Back to top