BREAD BEING SOLD BY THE SLICE IN JAMAICA 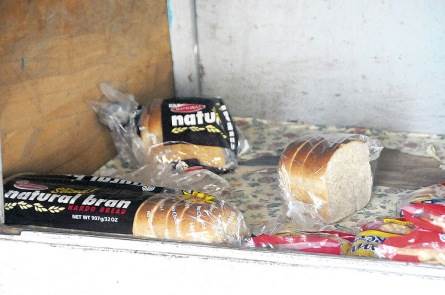 The harsh economic times have forced many inner-city shopkeepers to become more creative in pricing basic food items to suit the pocket of their strapped-cash customers.

Selling a single slice of bread may not be the norm in Jamaica, however, it is in many of these areas where shopkeepers retail a slice of the product for $20.

“When you operating business in the inner-city you have to come up with creative ways to meet customers,” said Sandra Campbell.

Campbell, who operates a shop in her Tivoli Gardens community was one of several persons who said that with people buying less, local businesses were forced to do more to keep their doors open.

“You find that people are buying less, as they are not earning as they would like as many of them are unemployed; in other cases things are just naturally hard,” Campbell told the Jamaica Observer.

According to Pauline, she has been purchasing items by the bulk and selling them in much smaller parcels for several years.

She ,however, admits that in recent times she has had to further reduce the size of the items for sale.

“People are really struggling right now. Them spending power gone so if you don’t get creative you bound to suffer,” she said, while attending to a customer at her shop last Friday.

Pauline explained that her customers can purchase a quarter of a loaf of bread.

“Well for me I sell a quarter of the bread for $50 and if they want, people can purchase a cut of butter for $20,” said Pauline, explaining that this butter is just enough to spread on two slices of bread.

In Kingston Central another shop operator has also had to further reduce the quantity of some basic food items in order to meet her customers’ budget.

“Right now all half pound ah flour, rice or sugar me sell at my shop,” said the pleasant-face business owner who identified herself as Merl Davis.

Operator of a wayside cookshop, Leroy ‘Lick Shot’ Williams, said this is a way of survival for residents in these areas.

“Yes man I am fully aware of the practice that is how we shop and restaurant owners have to structure our prices to reach out to customers; If we don’t do that we will suffer,’ said Williams as he uses a machete to cut up pieces of meat.

Williams explained that at his food shop, customers are able to purchase a meal of rice and peas and chicken back for $100.

“With one of these meals a youth who nah work can buy a food and a small drinks and still survive,’ he said.

A liquor store-owner and operator, Beckford said this approach is essential to the survival of businesses.

“Yes because even at my business people are able to buy liquor and other drinks and juice much cheaper than what they could get at a regular shop,” she said.

In the St Andrew Community of Maverley, a road side restaurant operator who identifies himself as Wayne agrees.

“Economically things are getting harder so business operators have to be trying to find ways to slash prices to meet the customers,” he said

In Jamaica, the unemployment rate measures the number of people actively looking for a job as a percentage of the labour force.

0 thoughts on “BREAD BEING SOLD BY THE SLICE IN JAMAICA”