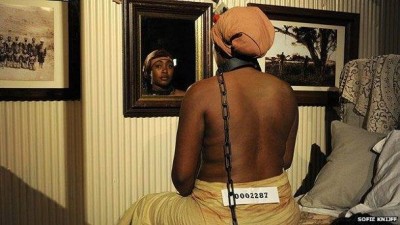 The London Barbican Centre recently displayed Black actors as slaves in chains in its Exhibit B presentation. However, after a successful media campaign, the controversial exhibit was cancelled.
Based on the 19th century tradition of Whites putting African slaves on display in museums, Exhibit B quickly gained large acclaim, with the Guardian calling it “both unbearable and essential.” One of the 12 scenes in the exhibit featured a Black woman shackled to a bed (pictured); another showed a Black man wearing a metal mask.
But quite a few people were disgusted at the show.
Sara Meyers, a Birmingham activist, called it “an ugly stain on European history.”
She soon launched a “Boycott the Human Zoo” campaign, saying the display provided a narrow view of African history.
“The African narrative is always being told from a colonialist and imperialistic viewpoint, that they are the victors and we are victims, when there is so much more to African history,” she commented on the campaign website.
“It’s time to tell our own story.”
In late September, more than 200 demonstrators took over underground tunnels in London’s transit system, forcing the Barbican Centre to cancel the project.
South African director Brett Bailey, who birthed the project, defended himself on Facebook:
“I appreciate that interpretations of this piece, as of any creative work, can vary; and that my intention to explore the machinations of systems of racism and how they dehumanize all who are touched by them can be read in different ways. I do not portray the world in the binaries of black and white, wrong and right, good and evil. I am an artist that works with colours and shades. The fury around EXHIBIT B is generated in large part by photographs of the work and on a sensationalistic article in a UK national paper that has many exaggerations and inaccuracies, and on the resulting social media hysteria.”
The Barbican Centre also issued the following about the cancellation:
“Last night as Exhibit B was opening at the Vaults it became impossible for us to continue with the show because of the extreme nature of the protest and the serious threat to the safety of performers, audiences and staff. Given that protests are scheduled for future performances of Exhibit B we have had no choice but to cancel all performances of the piece.”
The gallery added that it was “profoundly troubling that such methods have been used to silence artists and performers and that audiences have been denied the opportunity to see this important work.”