BROTHER IN THE MIDDLE OF THE MARRIAGE 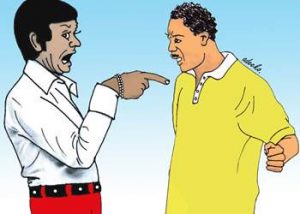 Dear Taiwo,
KINDLY help me out because I am yet to believe that all what happened to my wife and I are the handiwork of my elder brother. I have always heard about witchcraft and juju, but I never believed I could be a victim, I hardly believe they exist, talk less of becoming a victim. And if by chance, you or some of your readers can confirm the words of the pastors and spiritualists that my brother and his wife are responsible for my woes, I would not hesitate to take his life with my own hands.
ADVERTISEMENT

He is my elder brother; both of us are my mother’s only children. My father died when I was three years old and he was six, instead of helping out with our schooling and making sure that we had good education and lived comfortably, my uncles took over all our fathers properties and even sent our mother away to her people because she refused to marry my father’s younger brother.

That was how the responsibility of taking care of my brother and I became that of my mother alone. She also refused to re- marry because according to her, she wanted a situation where she would concentrate on giving both of us the best without any interference. She tried her best but because of cash constraints my brother had to drop out of school to learn a trade and began to work so that I could go to school because our mother fell ill in the process and she couldn’t do much.

Although, I went to the university, I did so late because I also had to stay home and work for sometime so I could make some money. I met and started dating my wife in my final year in the university. We were in the same faculty, but studied different courses. I read Economics and she studied Sociology. We met at one of our faculty’s inaugural lectures and when some of my friends learnt that we were friendly, they warned me to be careful so that she wouldn’t break my heart. Not because Layo is a bad person, but because we were from different backgrounds; she has a pedigree, the proverbial kid born with a silver spoon and I was a boy from a lowly background.

Layo, however, was and still remain a very humble and nice person. I owe God, my wife and her parents whatever I am today, because she loved me with everything she has. Contrary to everyone’s expectations, even her parents took to me like I am their child. My meeting, dating and eventually marrying Layo, changed my life and that of my family members because after hearing my story, Layo’s parents stopped at nothing to make sure I and my family were comfortable.

After our youth service, Layo was supposed to travel abroad for her master’s degree, her parents made sure we went together and they sponsored my bills. While I was away, my mother became their responsibility. I did not rest on my oars, I worked while I was studying abroad and with the little I made, I encouraged my elder brother to go back to school. He went to the polytechnic and obtained his Ordinary National Diploma (OND) by the time I returned.

Layo and I got married two years after we returned. While I was abroad, I sent some money home to my brother to help me purchase some properties, when I came home and asked him, he couldn’t produce anything. I was lucky to have Layo’s parents taking care of my mother, if not for their kindness, my mother probably would have died before I returned because my brother never spent a kobo from all I sent home on her.

He was already married with two children by the time I got married. You wouldn’t be surprised that I became solely responsible for his children’s schooling and all other things. Despite the fact that he learnt a trade of iron bending and his OND certificate, my brother could not sustain a job from morning till evening. He is a loafer; all he knows how to do is spend money. When I discovered that he doesn’t want to make anything out of life, several times I have given his wife some money to start a business with her secretarial job, but she also would end up with nothing and they would always come back for more.

Ordinarily, one would expect my wife to complain, but Layo would not complain. She has single handedly even sometimes without my knowledge given both husband and wife money several times. Whenever I raise their issue and said I wasn’t going to help out, she would be the one to plead on their behalf and her argument was always that we should help and do whatever we could because of their children.

This is because we are yet to be blessed with children. It is not that Layo couldn’t get pregnant, but she has never carried one to term. Every time she became pregnant, she would lose the baby. If I am going to be modest, Layo had lost almost seven pregnancies in our five years of marriage.

Despite all these, she remained my source of joy and our love for each other remained undaunted. She however, lost a seven-month-old pregnancy last month, precisely January 2. We had all hoped that she would carry the pregnancy to term and our joy would be complete, but it was not to be and I almost lost her.

Fortunately, her aunt, her mother’s elder sister was around. She is a prophetess in a spiritual church; she intervened with prayers and said that all what had happened to us is as a result of witchcraft. She asked me to ask my elder brother and wife some questions. I was shocked and at the same time scared, because I never believed in these.

Instead of going to meet my brother, I went to my mother. What she said shocked me more because she said Layo’s aunt said the truth and that she had been trying to tell me these, but I would not listen. Because she was worried about what had been happening to my wife and I, she had gone to so many places and she was told the same thing. She said she had called my elder brother several times and asked him what I did to him.

I went to meet my brother and asked him some questions because Layo said I should be careful, all he was able to say was that I can’t have it all.

He said since he had to live a wretched life so I could live big, then I should be able to take care of him and his family. I was so angry at his response that we almost had a physical brawl.

I told some of my friends what transpired between my brother and I and one of them offered to take me to his pastor who will help with prayers. I am yet to believe the fact that my brother could be this wicked, but if I am able to get a concrete proof, I will kill him with my own hands. Please, I need your advice and those of your readers, can my brother be the cause of our childlessness.
Raphel.

0 thoughts on “BROTHER IN THE MIDDLE OF THE MARRIAGE”