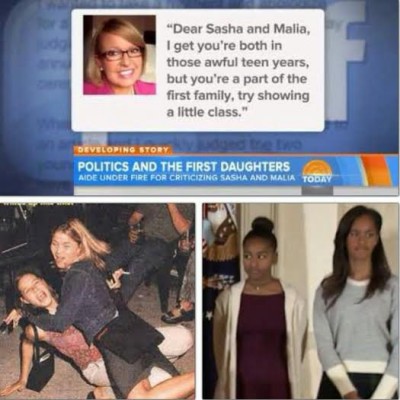 DI SENDER SEH-So this filth Elizabeth Lauten had the nerve to disrespect the president’s daughters smh. Mind you There isn’t a lot of footage with these girls. I would say , in total, there’s only minutes of footage in which to observe them over the last 6 years. Certainly not enough to gauge what kind of people they are. You have no actual basis for this statement filthy infidel. But let’s not forget
President Bush’s twin daughters Jenna and Barbara were ticketed by police in Austin Tx at the age of 19, for alcohol-related misdemeanors, while attempting to buy alcohol at a Mexican restaurant. Jenna Bush was cited for misrepresentation of age by a minor for allegedly using some else’s identification to order an alcoholic beverage. Barbara Bush was ticketed for possession of alcohol by a minor.