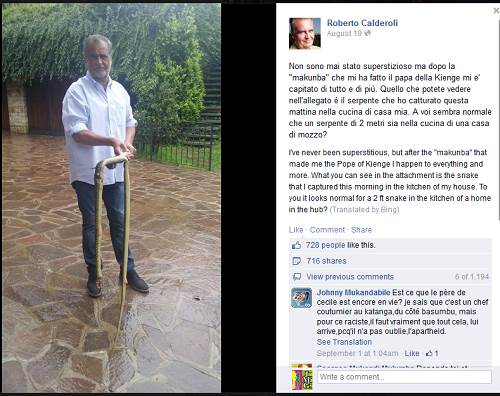 A controversial Italian lawmaker has blamed a recent series of accidents on a witchcraft he claimed was cast on him by the African father of a rival politician he once compared to an ape.
Roberto Calderoli, a senator with the anti-immigration Northern League party, urged the father of former government minister Cecile Kyenge to revoke the alleged spell, after he found a 2m-long snake in his kitchen.
“I’m not a superstitious person but since Kyenge’s father made the macumba [witchcraft] all sorts of things have happened to me,” Calderoli, 58, wrote on Facebook, posting a photo of himself holding the reptile.
The post caused a backlash from netizens, who accused the 58-year-old politician of holding racist prejudices, and from animal right activists angered at the killing of the animal.
The senator said the intrusive snake was the last in a series of misfortunes that he was the victim of in the last 12 months, as he said he was hospitalised six times and lost his mother.
In the last incident, he fainted shortly before boarding an aircraft and broke two fingers and two vertebras in the fall.
“Maybe it is time to send a message of peace to father Kyenge and ask he revokes the ritual,” Calderoli, who served twice as minister under Silvio Berlusconi’s government, told an Italian magazine.
In July last year, the senator sparked a storm of criticism for saying Congolese-born Kyenge – Italy’s first black minister – reminded him of “the features of an orangutan”.
He later apologised but refused to quit as vice-president of the senate. 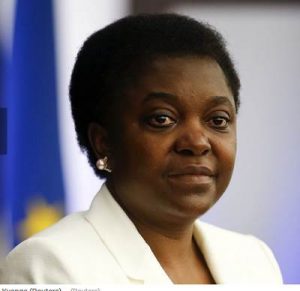 As controversy was raging, Kyenge’s father, Clement Kikoko Kyenge, a tribal leader in Katanga, a south-eastern province of the Democratic Republic of the Congo (DRC), demanded his ancestors to free Calderoli from “evil thoughts” in a prayer performed before the cameras of gossip magazine Oggi.
“If his apologies to Cecile were true he has nothing to worry about. If instead he apologised out of political convenience that might have annoyed the ancestors,” Clement Kikoko Kyenge said replying to Calderoli’s request he revokes the spell.
His daughter dismissed the controversy saying that as a Christian Catholic, she doesn’t believe in rituals and magic; that performed by her father was an “act of forgiveness and acceptance” and not witchcraft, she added.
Born in DCR, Kyenge arrived in Italy in the 1980s to study medicine and went on to become an ophthalmologist in Modena.
Her appointment as minister of integration – an office she held since February this year – was hailed as a big step on Italy’s difficult path towards integration but was marred by a number of racist attacks.
She is now serving as a member of the EU parliament with the