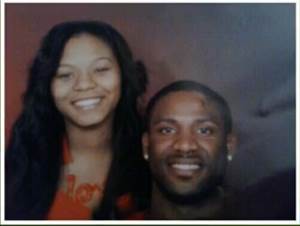 Questions remain in the fatal kidnapping of a Decatur, Ga., couple as the authorities continue their search for suspects, WXIA-TV reports.
Jeronta Brown and his fiancee, Briana Brooks, were returning home after taking their 8-month-old baby and teenage niece out to eat early Saturday morning. As they were walking toward the house, they were jumped by a group of men, according to the report.
Brown and Brooks were put into the back of a van. The children were able to escape, the station reports.
Brown’s aunt Myesha Brown told the station that the kidnappers tried to get inside the house before taking off. “The guys walked up, started ringing on the doorbell, beating on the door, yelling, ‘FBI, FBI,’ ” she said.
Myesha Brown instead called the police. After the kidnappers left, a relative got a call from them, demanding a $150,000 ransom.
According to Myesha Brown, when authorities arrived, they speculated that Jeronta Brown was pulling a prank on his family and did not take the situation seriously.
A driver later spotted the couple 17 miles away from their home, lying in the street. They were both handcuffed, and each had one shot to the head.
Jeronta Brown was dead. Brooks, who is seven months pregnant, was alive, but her condition remains unclear. According to WXIA, doctors delivered a baby girl via cesarean section.
The family has since managed to get a $15,000 reward together for anyone who can tell them who is responsible for the tragedy.