CHILD ABUSE HOTLINE TO BE SET UP IN JAMAICA

The age-old adage has charged that ‘children should be seen and not heard’. But now a United Kingdom-based charity wants to change that narrative as it urges children to speak out, particularly when they are being abused.

The group, Ellen Pearl Outreach Children’s Charity (EPOCC), is launching a 24-hour children hotline locally where those who are being abused can call and be heard.

According to nurse and administrator for the Committee for the Upliftment of the Mentally Ill, Joy Crooks, the launch of such an initiative in Jamaica is timely, since a number of children are being abused and have nobody to confide in.

“We believe as adults – especially the older generation – that children are to be seen and not to be heard, and we have to move away from there because there are many experiences that children are experiencing a lot earlier than even when we were growing up,” said Crooks.

“They have got to be able to channel and talk about these feelings, and to verbalise it; and also, children have got to feel comfortable that when they are talking about an experience they feel as though they are believed and not be put in doubt or be blamed that the situation was brought on by them.”

Crooks is a trustee member for the EPOCC, which will launch its Jamaican chapter on May 27 at the University of the West Indies, Western Campus.

The free telephone hotline for children is intended to empower Jamaica’s most vulnerable citizens by making counsellors available to them every second of the day to listen, counsel, educate and refer them to agencies which can provide further assistance.

Children will not be required to give their names or other personal details.

Psychologist Dr Pearnel Bell believes that children will be more inclined to share their stories of abuse over the phone rather than in person.

FEAR OF SPEAKING
Bell told The Sunday Gleaner that perpetrators of abuse have often taken advantage of children’s’ fear of speaking out, and the availability of this hotline could put a damper on their efforts to cause harm.

“With this ‘childline’, the child can call as many times as they want,” said Bell, who is the local coordinator for EPOCC.

She said discussions are currently under way with telecommunications companies in Jamaica to set up the free hotline, and the organisation currently has about 50 volunteers who will be trained to become counsellors.

It is her hope that other individuals will volunteer their time to be trained as counsellors.

According to preliminary statistics from the Office of the Children’s Registry, there were 16,790 cases of sexual abuse reported against children between 2007 and 2014. 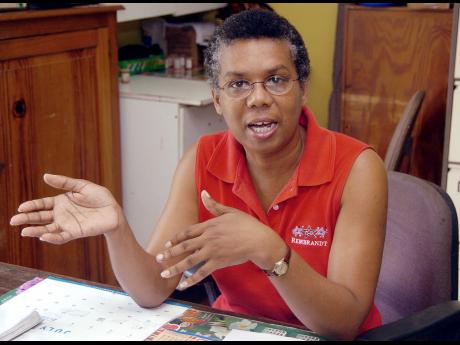 More than 21,000 children were deemed to be in need of care and protection during the seven-year period.

Bell, who has been a psychologist for the past 13 years, said she is confronted daily with stories or reports of abuse and is extremely concerned that a number of Jamaican children are self-mutilating as a way of escape.

“Top of the list is the sexual abuse. It is very rampant in Jamaica. Even though we have so many children’s organisations and they have been trying, the problem persists,” said Bell, as she noted that the physical abuse of children is just as worrying.

“Just recently, I had a child here (and) I tell you, I went home feeling very sick because of the level of abuse that this child suffer. At the time of my seeing her she was 11 years old, and the abuse started when she was about three years old. Broken ribs, broken hands, injury to the head, it was just too much,” she lamented.

EPOCC was started by Jamaicans living in the UK who are just as concerned as Bell about the level of child abuse in Jamaica.