Two years ago, Santa Cruz in St Elizabeth was a town of mostly locally operated businesses, with only a handful of Chinese establishments.

Today, there has been a rapid growth in Chinese- operated businesses as roughly 15 Chinese merchants have brought their business to the area.

“A since wah day so much a dem a come inna Santa,” a police officer said of the influx.

But what has caused it? 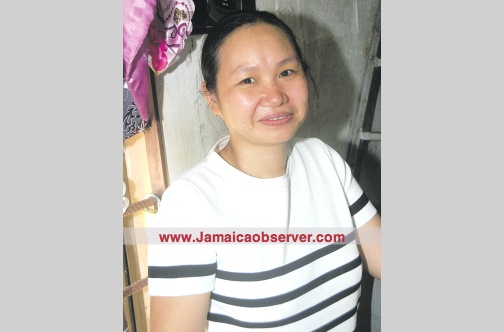 The entrepreneur responsible for Maxx Bargain Supermarket — one of the new Chinese establishments — noted that the town was a “more feasible” location for operation.

“Criminals are less than in other towns and stuff like that,” the merchant, who refused to give his name, told the

Jamaica Observer. “The people also have more manners in this town.”

Now a naturalised Jamaican, having lived in Jamaica for 20 years, he said he relocated his wholesale business from Linstead (St Catherine) to where he’s more comfortable and satisfied.

When asked what caused him to move to Jamaica, he said: “Nothing really, you find that there is more freedom than other place and then the temperature or climate here is good, so that’s why I’m here.”

For Wendy, the proprietor of Diamond Cash and Carry, Santa Cruz was selected based upon opportunity.

“Me just see one business; want try fi open one business and den come here. Is somebody did have in here before an they tell me dem a sell di business an me buy it,” she said.

The cosmetics store owner has been in the town for just over a decade. She said that prior to this store she owned a business in Savanna-la-Mar (Westmoreland).

She told the Sunday Observer that she liked the community because the people genuinely support her venture.

“It’s alright so far,” Wendy said when asked how business had been, “di people support me”.

Supervisor at MaxMart Supermarket Veronia Palmer, though she could not definitively say the reason her Chinese employers were attracted to the town, noted that they have become comfortable there.

Palmer said they relocated from Kingston in 2014 and have since developed a “good relationship with the community”.

But Santa Cruz locals argued varying reasons for the influx. One purported that the death of a highly respected businessman in the parish, Locksley Beadle, was a reason, citing that “when him did deh here, none a dem could a come set up shop in here”.

“Since Mr Beadle died, you see a lot more of them coming in,” Susan McKay of McKay’s Fashion and Variety Store stated.

Beadle was a real estate entrepreneur and farmer who owned several other businesses — a bakery, grocery store, hardware and supermarket —in Santa Cruz, his hometown. He was cited as a major contributor to the development of the township and instrumental in the founding of St Elizabeth Technical High School.

He was also said to be responsible for creating three housing developments. To date, multiple communities and streets are named after him.

Another resident, who identified himself as Keith, purported that the growth of Chinese businesses island wide is as a result of the government’s lax attitude toward their increase.

“A di Government allow it,” he said, seemingly irate. “When a ‘Chiney’ set up a business, him nuh affi pay tax fi five years.”

“So what they’ll do is operate the shop for the five years and when the time up them move or change the name of the shop so them can get another period of tax relief,” he continued.

While the Chinese believe they are investing to develop the community, local merchants are feeling the pinch.

Susan McKay, who co-owns McKay’s Fashion and Variety Store, argued that the 12-year-old business has seen a decrease in sales but welcomes the fact that customers have more options.

“Definitely, there is an impact. You realise that the town is more populated so people have more choices so definitely it would have a negative impact on the business, but it’s always good when customers have choices,” the entrepreneur told the

“People complain about our prices because, I mean, their (Chinese) prices are usually less than our prices based on where we get our things to buy. So people tend to shop with them or even when we lower our price it means that we get less profit, and with all the taxes that we have to pay then sometimes you barely can manage. You don’t know how you survive, you just survive,” she continued. “But it just means that you have to work harder, put in more effort, put in more time to see how best you can get something out of it.”

She devised mechanisms to cope with the increased competition.

“I shop sometimes locally in Kingston or sometimes I shop in Fort Lauderdale or Los Angeles and I suspect they get theirs from China. And the things in the United States they are more durable, it’s a better quality than what they would sell,” she said.

Palmer argued that her employers greatly contribute to the community by providing employment.

“They employ a lot of persons, although they are low-paying jobs, but they try to help the poorer class, dat a one ting wid di Chinese dem,” the supervisor stated.

Currently, there are 23 persons employed to work at MaxMart.

“The wages basically is minimum wages but we also get a small amount of overtime,” Palmer told the Sunday Observer. “It ranges from about $5600 to $10,000.”

Though the inspector was out of office when the team visited the police station, an officer on duty noted that the Santa Cruz police “see no problem with them” (Chinese entrepreneurs).

According to the Jamaica National Heritage Trust website, the first Chinese arrived in Jamaica in 1849 as indentured labourers to work on the sugar estates, following the the emancipation of the slaves. However, they disliked the nature of the work and soon left the estates to set up small grocery shops across the island. Eventually they were able to develop their businesses until the small grocery shops grew into large enterprises, embracing not only retailing, but also wholesaling and other types of activities.

Apart from the development of commerce, the popularity of Chinese food among Jamaicans is a lasting contribution to the island.