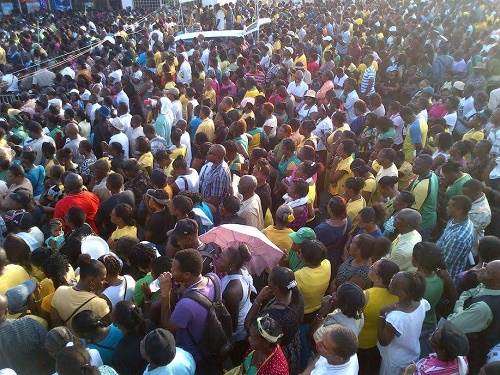 THE local church community is vowing never to sit idly by and allow homosexual lifestyles to infiltrate the Jamaican society.
This was the consensus of thousands of Jamaicans, including members of the Muslim and Rastafarian communities and secular members of society who gathered in Half-Way-Tree Square in St Andrew, Sunday, for a mass rally organised by the religious coalition- Churches Action Uniting Society for Emancipation (CAUSE).
The aim of the rally was to register the Church’s disapproval with any plans by the Government to repeal the buggery law, denounce homosexuality and to speak out about the growing threat to fundamental rights and freedom, in particular freedom of expression, conscience, and religious liberty posed by legalising homosexuality.
And with each speaker from the very long list the message was clear and well received by the throng of flag-waving Jamaicans, who for the most part were attired in the national colours.
“I am not afraid or ashamed to say that homo-erotica is wrong, unhealthy, unnecessary, and is unworthy of state support,” main speaker, Dr Peter Garth, said repeatedly amidst thunderous cheers from the huge crowd.
He said there are plans by different groups in Jamaica and other Caribbean countries to impose the homosexual lifestyle on the region but the Church would not allow it.
“Tolerance and diversity have taken on a new meaning in the social reorganisation, and bodies are meeting in the Caribbean to reorder and reorganise our lives and we say stop your nonsense,” said Rev Garth
According to Rev Garth, “There are no plans for any change by ‘straight’ Jamaicans, and no possibility that the church will sit or stand idly by and allow homosexuality to infiltrate our homes and schools and to go after our children.”
At the same time, he said, the church was not discriminating or advocating for violence against members of the lesbian, gay, bisexual, and transgender communities.
“We want to stand up for justice and for what is right, it is never about hatred, it is straight without hate, it is never about preaching that you are to attack persons, that is a lie from the devil,” said the reverend.
Meanwhile Pastor Michelle Smith, who had been a lesbian for 26 years, told the crowd that there is nothing good about the gay lifestyle and that it is a demonic movement
Smith said she became a lesbian after she was molested at age nine by a girl, raped at 13 and again at 19 by her sister’s husband, but God delivered her.
“I am here to tell you the truth about the gay lifestyle. There is nothing gay about it because it is a dead-end lifestyle, and J-Flag (The Jamaica Forum of Lesbians, All-Sexuals and Gays), you need to talk the truth and I need to raise the awareness because out of me came 40 demons,” she said.
“Most of the people that I roll with in the gay community contracted AIDS and died in public hospital. Where was the gay community then?” she asked.
She also rubbished claims that individuals are born homosexuals, noting that it is a behaviour that is learnt and is caused by some dysfunction in an individual’s life.

0 thoughts on “CHURCH SAYS GAY IS A LEARNT BEHAVIOR”