CLIPPERS TO BE SOLD FOR 2B 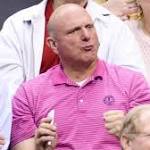 (CNN) — Former Microsoft CEO Steve Ballmer has signed a binding agreement to buy the Los Angeles Clippers for $2 billion from the Sterling family trust, a source familiar with the situation told CNN on Thursday night.
A second source, who was familiar with the negotiations, confirmed the terms to CNN.
The sale, negotiated by Shelly Sterling — co-owner with estranged husband Donald Sterling — will have to be approved at a NBA Board of Governors meeting. It was unclear whether a meeting set for Tuesday will go on, given Thursday’s developments.
And the sale still may have to be approved by Donald Sterling, according to earlier comments by his attorney.
Maxwell Blecher told CNN earlier that his client would have to consent to a sale and wants to be vindicated by the NBA, which is in the process of terminating the Sterlings’ ownership in the team for racist remarks Sterling made in an audio recording released online in April.
The many faces of Steve Ballmer The many faces of Steve Ballmer
Blecher: Sterling wants to be vindicated Lemon: He’s an 8-track in an iTunes era Sterling to ‘fight to the bloody end’
The NBA has damaged Sterling’s reputation, Blecher claimed in a lengthy interview with CNN’s “The Situation Room.”
“They know he is not a racist,” he said.
Blecher said Sterling is troubled by the charges of racism. He thinks of himself as an exemplary owner with a 33-year history of supporting the African-American community, Blecher said.
“He wants to be vindicated. He doesn’t want his tombstone to say, ‘Here lies Donald Sterling, racist.’ And the NBA has the power to make that right,” Blecher said, without saying what Sterling wants the league to do.
CNN reached out to Blecher for comment on news of the sale, but didn’t immediately hear back.
Blecher said earlier that Sterling had no interest in selling the team, rather than passing it down to his heirs. When reminded that Sterling would make a huge profit on a sale, even after capital gains taxes, Blecher it should have been the billionaire businessman’s decision when to part with the team. It’s not about money, he said.
In April, NBA Commissioner Adam Silver banned Sterling, fined him $2.5 million and prompted the league’s other 29 owners to begin proceeding to strip the longtime owner and his wife of the team.
Sterling is considering suing the NBA if he doesn’t get the resolution he wants. Blecher said they weren’t in a rush to file the lawsuit and were waiting in part in deference to Shelly Sterling as she negotiated the sale.
Biggest NBA deal ever
Ballmer is worth $20 billion, according to Forbes magazine. Another source said Ballmer’s offer earlier Thursday was $1.8 billion and Shelly Sterling was hoping to get a price that “started with a two.”
A group that included media moguls David Geffen and Oprah Winfrey also made a bid of $1.6 billion, the source told CNN.
If the deal goes through, it would be the largest sum paid for an NBA franchise. Last month, the Milwaukee Bucks, a bad team in a small television market, sold for $550 million.
But the Clippers are in the second-largest market in the league, albeit one they share with the Los Angeles Lakers, one of the most popular teams in professional sports.
The Clippers, however, have been more successful in recent seasons, including this one that ended in the second round of the NBA playoffs. They also have stars Blake Griffin and Chris Paul. And their TV contract reportedly will expire in 2016 and could mean billions to the owner.
The purchase would have to be approved by 75% of the NBA’s 30 owners. Last year they denied a sale to a group that included Ballmer that would have resulted in the Kings moving to Seattle, after the league’s relocation committee recommended keeping the team in Sacramento.
Ballmer, who attended several Clippers playoff games, told the Wall Street Journal earlier this month he would not move the team from Los Angeles.
Donald Sterling has been the controlling owner of the Clippers since buying the team in 1981 for $12 million.
Sterling’s wife: We’re just business partners
Source: Clippers draw as many as five bidders

0 thoughts on “CLIPPERS TO BE SOLD FOR 2B”