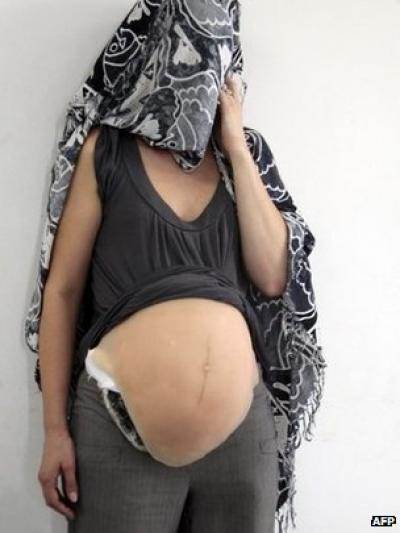 A Canadian national has been arrested in Colombia after trying to board a flight to Toronto with a phony pregnant belly stuffed with cocaine, police say.

The tourist caught the attention of a policewoman at Bogota’s International Airport who allegedly asked her how far along she was.

She reacted aggressively, which aroused the suspicion of officials who went on to search her.

This year, nearly 150 people were caught with drugs at Bogota’s airport.

About a third of them were foreign nationals, according to the Colombian authorities.
‘Delicate touch’

The Canadian national had entered Colombia at the beginning of August and was about to board a flight to return to Toronto, when a policewoman asked her how long she had been pregnant.

“[The Canadian] didn’t like the question, which made the official suspicious. Instinctively, she then very delicately touched the lady’s belly, realising it was too hard and extremely cold,” said the deputy director of Colombia’s police anti-narcotics section, Colonel Esteban Arias Melo.
Latex belly and cocaine that was hidden under it The latex belly was stuffed with cocaine

The woman allegedly said she was seven months pregnant.

After performing a body search, the police found two sealed bags stashed inside the latex belly, which contained 2kg (5lb) of cocaine.

Colombian authorities say the Canadian national will be charged with drug trafficking, possession and production and could be sentenced to between five and eight years in prison.

Government officials say 874 foreigners are currently being held in the country’s jails, the majority on drug charges.