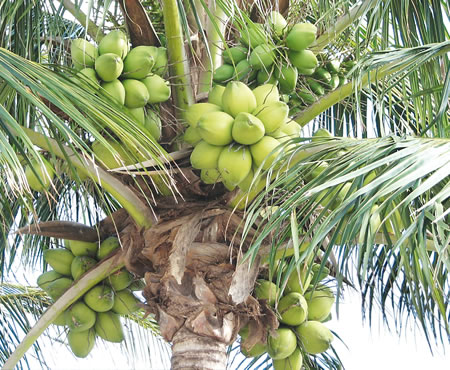 It may not be mere coincidence that the tropics with their abundant population of coconut trees host more than 40 per cent of the world’s inhabitants. Experts have found that coconut water taken to quench thirst helps to correct irregular menses.
Researchers found that coconut water possesses sex hormone-like activity that can help to boost fertility because of its effect on the menstrual cycle.
In a preliminary investigation of the effect of coconut water on reproductive functions of female Wistar rats, they found that it supports the regularisation of irregular menstrual cycle and promotion of the onset of the proestrus phase of the menstrual cycle.
Coconut water is obtained from within the fruit of the coconut tree. Coconut trees, which are found in large populations within the tropics, have been described as the “tree of life” because every part of the plant is useful for purposes ranging from nutrition to art and science.
Coconut water contains amino acids, sugars, and several minerals which are nontoxic, pleasant tasting source of hydration both orally and parentally.
Although the many virtues of coconut water on health such as its blood cholesterol lowering effect, anti-diabetic and antioxidant properties have been extolled, the possible link between coconut water consumption and fertility has been overlooked.
Pregnant women in tropical countries drink coconut water every day in order to easy morning sickness and prevent vomiting. Coconut water contains electrolytes, chloride, calcium, potassium, sodium and riboflavin. Also, it is rich with vitamin which is needed during pregnancy.
In the same vein, when coconut water is applied to affected skin areas with acne, wrinkles, stretch marks, cellulite and eczema, it clears up the skin and gives it youthful smooth looking skin.
For the 2015 study, the researchers at the Department of Physiology, College of Medicine, University of Ibadan, Oyo State, investigated the effect of coconut water on menstrual cycle and reproductive organs of 30 female Wistar rats over a period of 21 days. There body weights and menstrual (oestrus) cycles were monitored daily.
Some were fed freshly extracted coconut water daily while the control animals only had water. The study was published in the journals of the Archives of Basic and Applied Medicine.
At the end of the experiment, the animals were sacrificed and their internal organs such as the ovaries, brains, livers and kidneys assessed.
The researchers found that coconut water administration at different doses for three weeks produced significant reductions in body weight in a dose-dependent manner.
It also did not produce any significant effect on organ weights neither did it result in any visible alterations to the tissues of the ovary, womb and liver, suggesting that it was nontoxic.
However, there was a significant reduction in menstrual cycle length in animals treated with coconut water.
The researchers said that the reduction in the menstrual cycle length translates to more regular menstrual flow.
More regular menstrual cycle, they said could mean increased possibility of having an egg or ova for fertilisation.
“This hypothesis is being explored as it may yield a phenomenal breakthrough for fertility treatments,” they said.
The researchers, which included, Olufadekemi Kunle-Alabi; Opeyemi Akindele: Onowugbeda E.O; Adesina M.R and Raji Yinusa, said further studies are ongoing to reveal possible mechanisms for the fertility –enhancing effects of coconut water.
Also, Olufadekemi Kunle-Alabi and his co researchers indicated that coconut water can improve semen quality and testosterone levels in male rats.
In the 2016 study, published in Federation of American Societies for Experimental Biology (FASEB) journal, they indicated that males showed a significant increase in sperm count, sperm motility and serum oestrogen concentration when they take coconut milk.
Previously, some research shows that consuming coconut water can help to prevent dehydration in children with mild diarrhoea. But there is no reliable evidence that it is any more effective than other beverages for this use.
Some athletes use coconut water to replace fluids after exercise. Coconut water seems to help rehydrate after exercise, but it does not appear to be more effective than sports drinks or plain water.
Rich in nutrients and vitamins like riboflavin, niacin, thiamin and pyridoxine, and folates, coconut water has anti-viral and anti-bacterial properties that can help increase the body’s immune system and fight viral infections like flu.
Also, some research suggests that drinking coconut water might lower blood pressure in people with high blood pressure.

6 thoughts on “COCONUT WATER FOR FERTILITY”