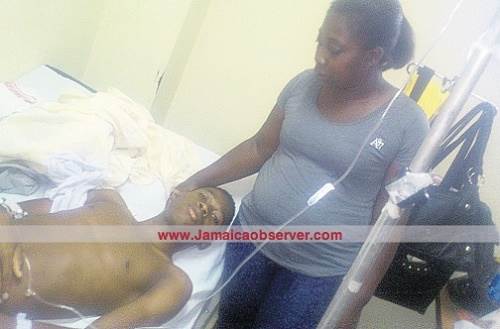 ANDRE Williams was always complaining of feeling weak, but as is common among a number of teens, his mother felt this was just an excuse to get out of work. Little did she know that his situation was so serious that it could cost him his life.

Williams suffers from what doctors have diagnosed as a rare and serious condition known as aplastic anaemia. This is a condition that occurs when the body stops producing enough new blood cells. Aplastic anaemia leaves persons feeling fatigued and with a higher risk of infections and uncontrolled bleeding.

The condition may occur suddenly, or it can occur slowly and gets worse over a long period of time. Treatment for aplastic anaemia may include medications, blood transfusions or a stem cell transplant. Aplastic anaemia can be very severe and even fatal.

“I was always accusing him that he was bleaching because his colour was pale,” his mother Everlin Bryan told the Sunday Observer as she stood by his bedside at the Kingston Public Hospital last week. “And when you tell him to do anything he couldn’t do it because him feel weak. Whenever I sent him out somebody would come and say you know that him sick because as him walk a short distance him bend down.”

She said that this became noticeable shortly after Williams contracted the chikungunya virus last September.