FEAR has gripped business operators and workers at Southdale Plaza in St Andrew following Monday night’s brazen killing of a couple outside their business place at the facility.

Fifty-eight-year-old Andrew Davis and 50-year-old Helen McGoo were shot multiple times as they sat inside their car, just after closing their bill payment and lottery ticket business about 7:45 pm.

According to the police, the two were approached by a gunman who opened fire at them. They were rushed to the hospital where they were pronounced dead. The police has ruled out robbery as a motive as nothing was taken from the couple.

Yesterday, when the Jamaica Observer visited the plaza, the majority of the shop owners and workers refused to speak about the incident, and those who did only divulged that they were shocked and fearful. 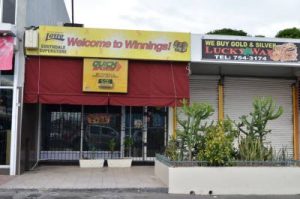 “It is very shocking. The feeling that I got inside my belly when I came this morning is still there,” one worker said.
She, along with her co-worker, said that the shooting has left them feeling very afraid.

“We are fearful and we are on the edge. We don’t know the circumstances under which they were killed, and we don’t know if this will become a trend,” the worker said.

“It’s just shocking to know that somewhere we traverse daily… and to know that something like this took place last night, so early, it really has us on high alert,” the worker added as she lamented the inadequate security and lighting at the plaza.

One business operator expressed that: “We are scared and we are shaken up, especially since the police have indicated that robbery wasn’t a motive.”

However, not everyone was scared.

“I am shocked like every one else, but I am not fearful. I am a Christian and God has not given us a spirit of fear, but of love and of a sound mind,” one business operator said.