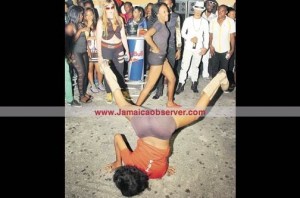 THERE has never been a shortage of the daring in the dancehall: be it lyrics, fashion, or dance.
Trends in the latter, however, have been raising a few eyebrows over the years. Bottle sucking, the latest trend to emerge, sees females poking several glass bottles in their mouths and seductively sucking on them while dancing.
Recently, a photograph of a female sucking on four beer bottles made the rounds on social media sparking rousing debates.
General practioner Dr Orlando Thomas said that although the muscles of the mouth were made to stretch and return to its regular position, jawbone dislocation can result from such a practice.
“As with the case of persons who participate in regular eating competitions, pain and jawbone dislocation can occur. There is also a possibility of the bottles breaking, which will result in injury to the mouth and throat,” he said.
The medical doctor also said that persons who are involved in such a practice are at risk of contracting hepatitis B and oral herpes.
“It is possible that some of the females are sucking on bottles that others drank from and hepatitis B can be transmitted by body fluids,” he warned.
Cultural analyst Dr Donna Hope Marquis sees these various explicit and almost pornographic acts by women as a direct response to the incursion of groups of men into the central spaces that were once solely reserved for them.
“More and more men are taking over dancehall’s limelight/videolight as dancers. Women have been pushed out of the limelight/videolight,” Hope Marquis told the Jamaica Observer.
She said male dancers are now reaping the intangible rewards which include status, hype, and recognition which translates into music video appearances, appearances in television ads and paid performances.
“The response, quite unplanned and unconscious, is to up the ante with attention-grabbing activities that will resonate in dancehall’s graphic and extreme spaces,” she said.
Hope Marquis said that one can expect these activities to increase and become more extreme as the women continue to be pushed out of these central spaces within the dancehall.