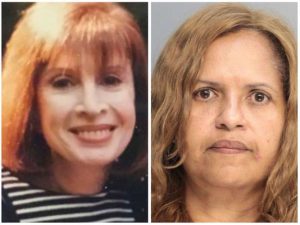 Clarkstown police are bringing Diana Nadell, 50, the mother of two children with Valley Cottage woman’s son, from Florida to face murder charge on Wednesday.
NEW CITY – A woman accused of plotting the murder of her mother-in-law to reap millions of dollars in inheritance will take center stage in Clarkstown Town Court on Wednesday morning.
Diana Nadell, 50, will be arraigned on charges she murdered 80-year-old Peggy Nadell, the Valley Cottage grandmother of her two youngest children.
Diana Nadell is being flown back under police guard from Florida.
She and Andrea Benson, 25, of Washington, D.C., are accused of beating and stabbing Peggy Nadell numerous times during the early hours of Jan. 25 after driving to Rockland from the District of Columbia. 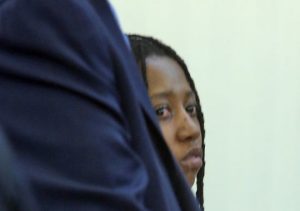 Andrea Benson, 26, of Washington, DC., was arraigned in Clarkstown Town Court on murder charges June 2, 2014. Benson was charged in connection with the murder of Peggy Nadell of Valley Cottage.(Photo: Seth Harrison/The Journal News)
At 1:17 a.m., Diana Nadell used a cell phone to awaken her sleeping mother-in-law and get her to open the front door of her Andover Road house, a Clarkstown police criminal complaint states.
Peggy Nadell’s daughter, Susanne Nadell-Scaccio of Airmont, found her mother dead hours later that Saturday with a knife through her chest.
Diana Nadell and Benson face charges of second-degree murder and second-degree conspiracy to commit murder.
The murder charges carry potential sentences of 15 to 25 years to life in prison. 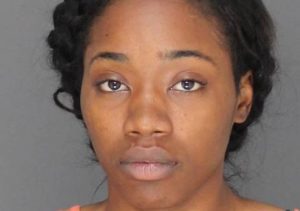 joyner
Tanisha Joyner(Photo: Submitted photo)
Eltia Grant, 24, of California, and Tanisha Joyner, 26, of Washington, D.C., are both charged with second-degree conspiracy to commit murder, a count carrying a maximum prison sentence of 81/3 to 25 years.
grant 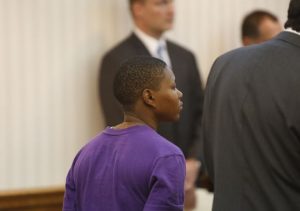 Eltia Grant, 24, is arraigned at the Clarkstown Justice Court in New City on May 29, 2014.(Photo: Ricky Flores/The Journal News)
They are being held on $500,000 bail each in the Rockland County jail.
Benson is being held without bail. A local justice cannot set bail on a murder charge and no pleas have been entered.
A Rockland grand jury is hearing evidence in the case, being presented by Rockland District Attorney’s Office prosecutor Richard Kennison Moran.
Clarkstown Police Chief Michael Sullivan speaks at police headquarters in New City May 21, 2014 announcing arrests in the murder of Peggy Nadell. (Video by Peter Carr/The Journal News)
Peggy Nadell’s $4 million-plus estate is an accumulation of stocks, bonds, trusts and other investments from her late husband and herself.
A political activist and Democratic Party member, Nadell had worked as a human resources executive at Xerox before retiring.
nadell
A Clarkstown Police cruiser outside 644 Andover Road in the Waters Edge section of Valley Cottage, where Peggy Nadell was found dead on Jan. 25, 2014.(Photo: Peter D. Kramer/The Journal News)
According to the complaints against the four women filed by Clarkstown police Detective Stephen Cole-Hatchard:
• Diana Nadell, who has two children with psychiatrist Dr. James Nadell as well as two adult children from a first marriage, wanted his 50 percent share of Peggy Nadell’s estate. James Nadell, who works with brain-injured patients, apparently was not aware of his wife’s plan, authorities said.
• As part of the planning, Diana Nadell reached out to Jamaican relatives — paying one brother several hundred dollars — and traveled to the island. Her Jamaican family contacted a relative, Eltia Grant, who brought Joyner and Benson, another relative, into the conspiracy. The women devised their plot through hundreds of cell phone calls and text messages.
• Diana Nadell flew to the Washington, D.C., area under the cover of attending a wedding before driving to Rockland with Benson.
• Joyner is accused of providing an alibi for Diana Nadell by telling police investigators that they had instead been together in Washington, D.C. Joyner also used Diana Nadell’s cellphone to make it appear that Diana Nadell was still in Washington, D.C.
On the scene of a police investigation at 644 Andover Road in the Waters Edge section of Valley Cottage where 81-year-old Peggy Nadell was found dead on Jan. 25, 2014. Peter D. Kramer/The Journal News