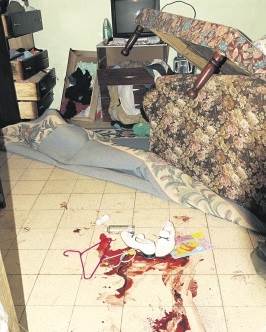 THE son of former Grant’s Pen don ‘Andrew Phang’, who was himself cut down by agents of the State, was killed by police at his home on Lady Huggins Avenue in the community yesterday.

He was identified by a relative as 18-year-old Shaquielle Stephens.

According to their report, the police went to 13 Lady Huggins Avenue and saw a woman and three men standing at the gate. They entered the premises and went to a house based on information they had gathered. But before they could apprehend Stephens, he allegedly pulled a gun and attempted to open fire. They, in turn, opened fire hitting Stephens.

The police said the gun seized was illegal.

However, as sleuths assigned to the Independent Commission of Investigations processed the scene, some residents accused the police of lying.

Blood stains were on the floor of the two-room dwelling where the shooting occurred and mattresses and furniture lay strewn about, an indication that the house had been ransacked by the police.

Stephens’ father, whose real name was Andrew Stephens, was the don of an area known as ‘Top Gully’. He was also said to be in his underpants when he was fatally shot and killed.

“Him dead just like him father,” the resident said.

The elder Stephens was cut down by members of the now-disbanded Crime Management Unit in October 2001 in Pembroke Hall, St Andrew.

Police said they went to a house in Meadowbrook Estate to conduct a raid and, as they approached, Phang opened fire and evaded them. They said he was cornered about four hours later at a house on Annandale Avenue in Pembroke Hall.

The police reported that Phang engaged them in a blazing gunfight and was shot. He was taken to hospital where he later died.

His killing sparked a massive demonstration and spurred a Coroner’s Inquest, but no one was found criminally liable for his death.