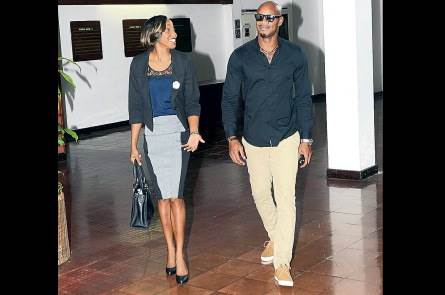 Simpson’s date is set for January 7-8, while Powell will face the Jamaica Anti-Doping Commission (JADCo) disciplinary committee a week later on January 14-15.

Both athletes failed drug tests at the National Senior Championships in June. “We are confident because we believe we have a strong case,” said Gordon, who along with Danielle Chai, is representing the two MVP athletes.

A three-member JADCo disciplinary panel led by Lennox Gayle, Dr Jephthah Ford and Peter Prendergast presided over the matter as both the JADCo representative Lackston Robinson and the athletes’ attorneys agreed on the trial dates and deadlines for the necessary documentations to be ready.

Powell and Simpson, who returned positive analytical findings for a stimulant, oxilofrine (methylsynephrine) in June, sat quietly in a pensive mood at the Jamaica Conference Centre yesterday, as their attorneys unsuccessfully argued for an earlier date.

For Simpson’s case, JADCo has been given an October 14 date to file to the secretariat their complainant’s briefing, and in return the athlete’s representatives have until October 28 to do likewise.

November 18 is the date set for the exchange of the witness statements and bundles by December 19. In Powell’s case, JADCo should file their complaint by October 22 with November 5 the date for his team to reply.

The exchange of the witness statements are set for November 29 and bundles no later than January 2. Powell and Simpson join Traves Smikle, Allison Randall and Demar Robinson, who also tested positive for banned substances with their trial dates finalised.