LASCO Distributors Limited yesterday apologised profusely to Jamaican sprint hurdler Omar McLeod whose gold-medal performance at the Rio Olympics in Brazil on Tuesday night was cloaked on social media after a controversial tweet was made from the company’s account.

Twitter users rapped the manufacturing, packaging and distribution company and called for a boycott of its products after an employee directed an inappropriate and derogatory tweet towards the athlete from the company’s account.

LASCO, which initially said its account was “compromised”, later suggested that it was “hacked”. The company also issued a statement apologising to McLeod and at the same time said that it terminated the contract of the employee following investigations.

“We immediately sent an apology directly to Mr McLeod and have since been in contact with him through his management team,” Peter Mark Chin, deputy executive chairman, LASCO Affiliated Companies, told the Jamaica Observer in a statement yesterday. 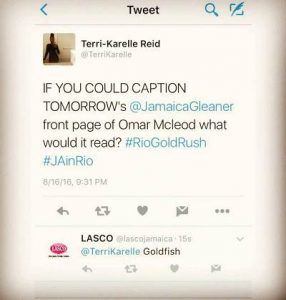 Chin said that the company has an existing social media policy and that in light of the incident “internal policies and procedures are being reviewed”.

“The employee was terminated based on a clear breach of our Engagement Standards and Code of Conduct,” he added.

LASCO also apologised to “fans, friends, customers, consumers, partners, Jamaicans and everyone for this terrible act”.

It added: “We, at LASCO, have the utmost respect for the remarkable achievement of Omar McLeod. We congratulate him on his gold medal victory in the Men’s 110m hurdles Olympic event [and] we deeply regret any embarrassment or displeasure caused by the post and again offer our sincerest apologies.”