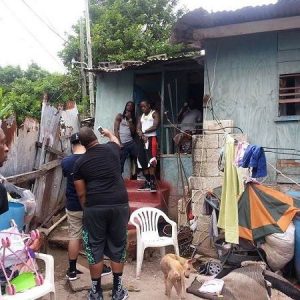 In 2010, The STAR broke a story that Canadian rapper Drake had donated US$25,000 (J$2.15 million) towards the building of a library in Cassava Piece. The donation was allegedly made after the rapper filmed the music video for Find Our Love in Jamaica, a video which also starred dancehall artiste Mavado.

Mavado’s manager, Julian Jones Griffiths, later told The STAR that the creation of the library was Mavado’s decision, however, Drake’s donation was merely providing assistance to his music associate.

“Mavado had plans so Drake decided to assist the project,” he said. Drake also confirmed his donation telling THE STAR. “I just wanted to show back some love by helping out with Mavado’s project on the Gullyside. It’s a very positive move and something I am very happy to be a part of. Education is the key to life, so to be able to assist in that process is very fulfilling.”

It has been three years since the donation was made and nothing has been said about the library. At least not until now, when a song surfaced called Mavado’s Diss released by former Gullyside artiste Flexxx, in which he questions the whereabouts of Drake’s donation.

The STAR contacted Mavado for comment on the issue which has raised questions on some websites, and he says he was not building a library, but rather a community centre. He also says Flexxx’s song is old news.

“That is an old song which Flexxx did in the heat of the moment, and that is not even true. Everybody in Cassava Piece knows that the learning centre is built; it is more like a community centre and not a library, but the building is there. The learning centre was built from the ground up by members of the same community, it was a community project and the first week’s paybill for the building was $300,000, so the building itself cost way more than US$25,000, so we give thanks to Drake for his kind gesture. Some Europeans built a library up by the all-age school so there was no need to build another library,” he explained.