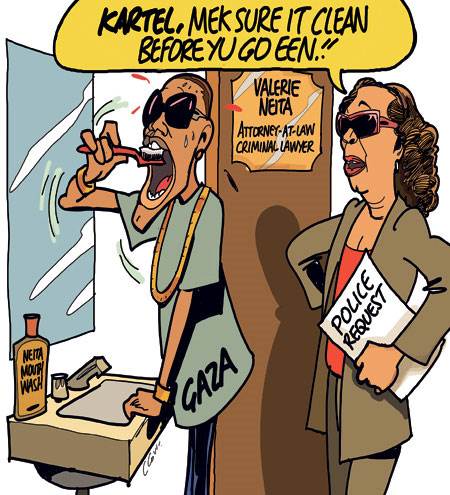 VYBZ Kartel’s mother believes that her son was set up by the police and done a further injustice when a jury on Thursday convicted him and three of four co-accused of murder.

Teresa Palmer shared the sentiment with the Jamaica Observer a day after Vybz Kartel (real name Adidja Palmer) and friends Shawn ‘Shawn Storm’ Campbell, Andre St John and Kahira Jones were convicted in the Home Circuit Court for the August 16, 2011 murder of their friend Clive ‘Lizard’ Williams over the disappearance of two illegal guns. Shane Williams, the fourth co-accused mans, was acquitted at the end of the five-month-long trial.

Sitting on the verandah of her Portmore, St Catherine home under the gaze of a massive banner of her entertainer son, Palmer — who asked not to be photographed — displayed a range of emotions while talking about her boy and the case.

Her three adult daughters and a family friend looking on, Palmer’s face was a mixture of disgust and anger when she spoke of the trial and investigation.

She teared up as she reflected on her son’s conviction. But her eyes lit up, and she laughed at times, as she recollected his cutting of classes to go to recording studios and his love of music and reading. Palmer also recalled fondly the time when Vybz Kartel, at 11 years of age, made soup seasoned with curry for her when she was sick in bed.

“I long to see him,” Palmer said at one point, adding that her son had been insistent on her not visiting him in lock-up over the two years he’s been there.

“He thinks I’m going to cry. If he tells me to come I would go visit him. You know where I want to visit him?” she asked, then answered: “At his house.”

Palmer said her son is innocent and that he’d been targeted because of his music and image.

“He’s not that type of person,” Palmer insisted. “They say who God bless, no man curse. You can fight against a man like this? You [should] fight against people who come into your community and rob, rape and kill.”

She added: “I don’t know why society is fighting the man and he never took anything from them.”

Morine Nelson, Vybz Kartel’s sister, who gave character evidence in the trial and who was sitting in on the interview with her mother, told the Sunday Observer sarcastically that she’s waiting to see a reduction in crime now that her brother has been convicted. Her remark is in relation to comments by Security Minister Peter Bunting that Vybz Kartel’s music promoted crime.

Nelson, who is a teacher, said she’s no fan of her brother’s music, but she can’t see how people can hate him without knowing his background. She added that he’s a good father who takes care of his children and helps them with their homework.

“The society came together to silence Kartel,” she said. “I don’t know when we will recover.”

Saying her piece on Bunting’s comment, Palmer asked rhetorically if music could influence a person to do what he or she doesn’t want to do. She said that music with “slack” and violent lyrics existed long before her son started his career. She added that if people didn’t want to listen to his songs they had the right to change the radio station or flip the TV channel when they are being played.

“Me go church and sometimes when I hear Kartel’s music I turn up the radio,” Palmer said smiling.

“They look on him and he’s tattooed. He’s not the only one who’s tattooed… Everything he has he worked for it,” Palmer said.

The family also complained about being kept outside of the courtroom for most of the trial, which was also attended by family members of the deceased.

During the trial that started in November, attorneys for the accused ran a defence of conspiracy, pointing to evidence which, they said, showed that the police had set up the men. Evidence of a conspiracy, the lawyers said, could be seen in the disappearance of a control CD to verify crucial call data records, the creation of the “chop up fine, fine” text three hours after a phone belonging to Vybz Kartel was seized by the police, that the phone was being used while in police custody, the disappearance of the main witness’ original statements and a letter from the main witness who said he was forced to give his statements to the police and that he had seen Williams after he was said to have been murdered.

During the interview on Friday afternoon, Palmer and Nelson recited these things that the defence said pointed to a conspiracy.

“I don’t like that. A lot of lies were told. They tampered with the phones,” Palmer said.

“Dem man yah no need no sentence. Dem must go a road.”

Palmer said she was praying in her house when she was informed of the verdict and had to cry when she reflected on “how unfair” the trial had been. “Me vex, man. Me vex,” she said, adding that she hadn’t eaten since the verdict.

“Dem haffi let go mi pickney, man,” she said toward the end of the interview.

The men are to be sentenced on March 27.

Tom Tavares-Finson, the attorney for Kartel, has said that he would be filing an appeal.