DI OBSERVER SAID THE RISE AND FALL OF VYBZ KARTEL 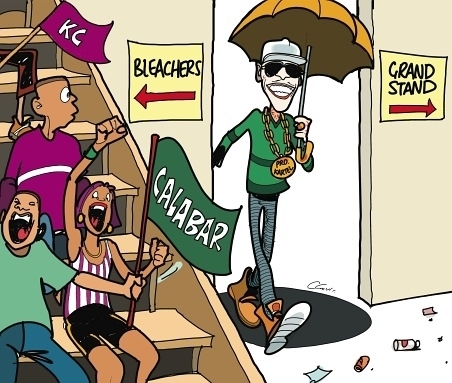 NEXT week Thursday the nation will know the fate of convicted entertainer Vybz Kartel as Justice Lennox Campbell will sentence him and his three co-accused.

After being found guilty of murder on Thursday, the glamourous side of the life of this controversial but phenomenal dancehall practitioner could be effectively over.

Depending on whether or not Justice Campbell takes into consideration his attorney’s expected plea for leniency, Vybz Kartel faces the possibility of spending up to 50 years in prison.

At the very least, he will have to spend about two years in prison until his appeal is heard.

If that appeal is unsuccessful, then in the best -case scenario, he will have to spend at least 15 years before being eligible for parole.

All that depends on the ruling of the judge.

Under Jamaican law, murder is punishable by death but that sentence has not been carried out since Stanford Dinnal and Nathan Foster were hanged on February 18, 1988 at the St Catherine District Prison.

But how did Adidja ‘Vybz Kartel’ Palmer come to this?

At the time of his arrest inside a hotel in New Kingston in 2011, he was at the top of his game and some sources said that he was earning more money than some of Jamaica’s top executives with his music, which ruled the dancehall and the airwaves, Vybz Rum, condoms, cake soap, his line of shoes and his music production company Adidjahiem/Notnice Records.

This while not being able to ply his trade in the major markets of the United States and Europe.

According to his sister, Maureen Nelson, who is the vice-principal of a high school in Portmore, St Catherine, Adidja Palmer grew up in a home where discipline and education were instilled by his parents.

“They used to call us ‘grille up’ because when other children were outside running up and down we had to look out from behind the grille. Our father knew the importance of education and we grew up sheltered,” Nelson said when she appeared in the Home Circuit Court last month to give character evidence on behalf of her accused brother.

He attended Calabar High School but dropped out early because, according to Nelson, he spent most of his time pursuing musical interests and not because of indiscipline, Nelson said.

One of his teachers at Calabar, who asked not to be named, said that Palmer was a bright student.

“He could have become a rocket scientist if he had so desired. He was by no means a slow learner,” the educator said.

A police officer who interacted with him while he was locked up at the Greater Portmore Police Station was also impressed with his intelligence quotient.

“He remembered every police officer by name. Him is a bright youth. It just unfortunate that he made the wrong choices,” the cop said.

His penchant for lyricism could not be contained, and the aspiring Adi Banton, as he called himself then, recorded his first single Love Fat Woman at the tender age of 17.

That signalled the beginning of a career which would see Vybz Kartel growing to become part of the famed ‘Alliance’ which was headed by another enigmatic and controversial dancehall star Bounty Killer.

While he was a member of Alliance, Vybz Kartel’s lyrical prowess came even further to the fore as he penned songs for Bounty Killer and rose through the ranks to eventually become one of the syndicate’s rising stars.

He also linked up and made friends with another rising star Mavado.

But soon, his stint at the Alliance would come to an end and he left in a huff, all the while trading verbal tirades with Bounty Killer and also hurling insults at some of the other artistes in Alliance who thought that his move to become an independent artiste was a mark of ingratitude.

His former friend Mavado became his arch enemy and their differences spilled over in the street and police sources claim that the feud was one of the main causes of a Gaza/Gully war that plagued sections of Mannings Hill Road and was responsible for a number of murders and shootings.

But the Gaza/Gully rivalry would spread nationwide even in schools and caused the Police High Command and, later, former Prime Minister Bruce Golding to summon both artistes and warn them to rein in their rabid followers and put an end to the unwarranted bloodletting.

One police source told the Jamaica Observer that both men were warned that if they did not let up, serious consequences would follow.

“We called in the two of them and made them know that we were very much aware of what they were supporting and warned them that if they did not stop, they would either be taken out or be locked away. It seemed Mavado heeded the warning but Kartel was not ready,” the cop said.

The section of Mannings Hill Road is no longer plagued by infighting and has been peaceful for years.

But like a candle on a hilltop, Vybz Kartel’s talent could not go unnoticed and soon he rose even further to become the top dancehall act.

But, as usual, his rise was not without controversy.

After forming his own label and surrounding himself with upcoming artistes, reports began to emerge that he had a penchant for beating his artistes and female DJ Gaza Kim went public with photos of a battered face, and claiming that she and her brother were beaten by men from the Gaza Empire at the behest of the Gaza ‘boss’.

Gaza Kim, whose name is Kim Hamilton, even issued a statement confirming the attack.

“I, Kim Hamilton aka Gaza Kim will like to make it publicly known that I was indeed assaulted over the weekend. I’ve visited the doctor … I’m still traumatised but recuperating through my ordeal. I’ve taken the necessary actions to correct the wrong that was done against me and legal advice has been sought out,” the statement read.

In response, Vybz Kartel issued his own statement which he urged the female artiste to report the incident.

“I do not condone violence, especially any attacks against females and children. Gaza Kim is a very young and very talented singer who I hope will reach far in her musical endeavours whether or not she is a part of the Portmore Empire.

“My deepest sentiments go out to her,” Vybz Kartel’s statement said.

There were also reports of run-ins with former Portmore Empire artistes Black Rhyno, Meritol, Jah Vinci and Lisa Hype, all of whom were expelled.

But things would take a turn for the worse, after cops from the Flying Squad stormed a hotel in New Kingston and hauled him and a female companion out of a room.

He was subsequently slapped with two murder charges — the July 2011 shooting death of Barrington ‘Bossie’ Bryan and the August 2011 murder of Clive ‘Lizard’ Williams — for whose death Vybz Kartel, Shawn ‘Storm’ Campbell, Kahira Jones and André St John were found guilty of by an 11-member panel of jurors on Thursday last.

Police had accused the men of beating ‘Lizard’ to death in a house owned by Vybz Kartel at Swallowfield Avenue in Havendale, St Andrew, after two illegal firearms went missing.

The prosecution’s case rested heavily on the testimony of Leonard Chow, who claimed he had to flee the house in order to escape the same fate as he was given one of the guns for safekeeping.

Chow is now in protective custody.

Known for his tattoos and bleached skin, Vybz Kartel made an impassioned plea for his freedom in an unsworn statement during the recently concluded trial.

“My Lord, I bleach my skin and I am heavily tattooed, also. My Lord, that is merely superficial; that is the persona of Vybz Kartel, not Adidja Palmer. My Lord, I think you will agree, I am a normal man. I even have a family, some of which are here today, including my grandmother, cousin and mother-in-law,” he said.

But his plea and that of Campbell, Jones and St John fell on deaf ears, as the jurors voted by a margin of 10 to one that all should pay for the crime.

Attorney-at-law Miguel Lorne cited as unfortunate that Vybz Kartel was found guilty as he had been making attempts to broaden his horizons and reform his life while he was on remand awaiting his fate.

“He had actually started reading uplifting material like the Autobiography of Malcolm X, The Philosophies and Opinions of Marcus Garvey, The Promised Key and books on herbal healing. He was also seriously considering to stop bleaching,” Lorne told the Sunday Observer.