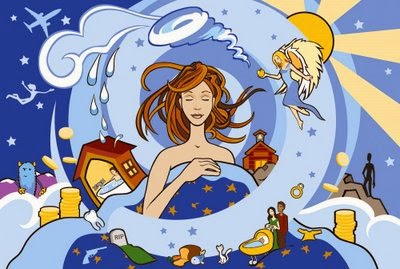 In this particular teaching on dreams it is my desire to take you to another level of dream
interpretation as it relates to the symbols in our dreams.
One of the first things we must cement into our understanding in an effort to progress to the next level of dream interpretation is that we must not become comfortable or subscribe to the erroneous fact that what a particular symbol/objects stands for in one dream does not necessarily mean that it would represent the same thing in another dream.
As usual, let’s dig through the hidden revelation of scripture to expose this mystery. As a reminder, Pharaoh who indeed was the king of Egypt had two strange dreams. In his first dream he said that he saw the malnourished cows eating up the healthier cows and in his second dream he saw the sickly looking corn eating up the healthier corn.
Now surprisingly when Joseph interpreted Pharaoh’s dream he immediately indicated to Pharaoh that both dreams carry the same meaning, however when we analyze both dreams, while the meaning maybe the same the symbols are very much different.
In the first dream the malnourished cows represented the pending seven years of famine, while in the second dream the pending seven years of famine was symbolized by the sickly looking corn. However on the other hand in the first dream the seven years of plenty was represented by the healthier cows, while the second dream the years of plenty was represented by the healthier corn, Genesis 41:17-24
This spiritual insight that is clearly being revealed to us is suggesting that we can not take for granted that a particular symbol carries the same meaning or representation in all dreams. This is why it is imperative that we rely solely on the Spirit of truth which is the Holy Spirit, whom the bible says is responsible for leading us into all truth, John 16:13
This is why when Joseph was originally brought before Pharaoh to have his dream interpreted, Joseph quickly made it known to Pharaoh that it was God and not him that gives interpretations to dreams, Genesis 41:16.
In another example, In the book of Daniel 2:38, the phrase, “Thou art this head of goal” represented king Nebuchadnezzar. However, in Daniel 4:20-22, this same king Nebuchadnezzar is symbolized by a tree and not a head of goal.
Please! These are powerful spiritual points to take note of when attempting to bring clarity to your dreams. By not having such knowledge then not only is it easy to misinterpret our dreams but this misinterpretation could reroute our destiny. The bottom line is this; dream symbols can have different meaning at different times or to different people. Again, thus the guidance of the Holy Spirit to bring accurate revelation to the mystery of our dreams.
Let’s say you had two separate dreams at two different periods of your life. In your first dream you saw a Lion attacking you. However during the course of your second dream you saw a Lion actually protecting you by attacking folks that were trying to harm you. Now such a dream could be quite confusing, right?
Well, in the first dream the Lion is symbolic of Satan and his kingdom of darkness, simply because scripture says the following in regards to such actions of a Lion, “Be sober, be vigilant; because your adversary the devil, as a roaring lion, walking about, seeking whom he may devour” 1 Peter 5:8. Subsequently, in the second dream the Lion is actually protecting the dreamer from whomever was attempting to harm him in his dream. Well we know that Our Lord and savior Jesus Christ is known as the Lion of the tribe of Judah according to Revelation 5:5. So, clearly the Lord was revealing to the dreamer that it was him that would defend and protect the dreamer from his enemies.
Again folks, it is such revelations that we as people of God are missing out on or lacking that has become the root cause of our failures in life. I will continue to do all that is within my power to unlock the mysteries of the spirit realm, especially as it relates to our dreams. Make no mistake, as a child of God you are no different than me, meaning, just like myself there are secrets/mysteries that God has set aside just for you but you must pursue and develop a hunger for it.
“The secret things belong unto the Lord our God: but those things which are revealed belong unto us and to our children for ever, that we may do all the words of this law” Deuteronomy 29:29.
Written By: Kevin L A Ewing
[email protected]
kevinlaewing.blogspot.com