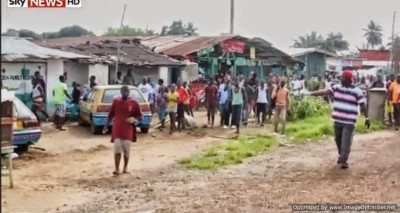 The shocking video shows an Ebola patient who escaped quarantine in search of food but was later caught and forced into the back of a truck. The footage, broadcast by Sky News, was captured in Monrovia, Liberia, in West Africa, which is currently in the grip of an Ebola epidemic.
He was roughly grabbed and bundled into a waiting ambulance. Watch the touching video at the top!
But why will they keep him in quarantine and not give him food to eat? That’s totally wrong as Ebola is not a death sentence and the guy could still make it. Anyway, he couldn’t take it again and had to take laws into his hands by storming out of the Ebola quarantine to search for food.
http://youtu.be/jlwg4n_RDno

0 thoughts on “EBOLA PATIENT ESCAPES FROM HOSPITAL TO FIND FOOD”