EL CHAPO CLEANS HIS OWN PRISON

Mexican drug lord Joaquin “El Chapo” Guzman is so disgusted by the dirt in his new prison cell that he has asked for chlorine to clean it himself, his lawyer said.

Guzman, 59, was abruptly transferred from his maximum-security prison near Mexico City to a jail in Ciudad Juarez, at the US border, on Saturday.

His lawyer, Jose Refugio Rodriguez, told AFP that he has since filed two motions to have Guzman returned to the Altiplano lockup, some 90 kilometers (55 miles) west of the capital.

Refugio Rodriguez said Guzman should remain close to the courts in Mexico City and nearby Toluca that are reviewing his criminal cases. Ciudad Juarez is nearly 1,800 kilometers away.

The attorney said he was concerned about the heavy military and police presence around the Cefereso Number 9 prison in a desert area of Ciudad Juarez, and said none of the inmates have been allowed to see lawyers since Saturday.
He said Guzman is isolated and complains that his “cell does not have the best health conditions. Joaquin has asked that they give him products to clean it, such as chlorine.” 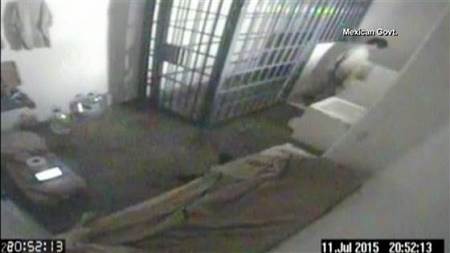 Guzman had already complained about his prison conditions at the Altiplano, claiming that authorities were waking him up several times per night.

In 2001, he hid in a laundry cart to sneak out of a maximum-security lockup in western Mexico. He was detained after a long manhunt in February 2014.

He escaped from the Altiplano prison in July 2015, when he snuck out through a 1.5-kilometer (one-mile) tunnel leading to his cell’s shower.

Guzman was recaptured in January and sent back to Altiplano, which is still considered the highest security prison despite his escape.

Authorities said his transfer to Ciudad Juarez was part of a normal rotation of prisoners and was also due to a security upgrade at the Altiplano prison.

Officials deny that placing Guzman close to the US border had anything to do with extradition requests in the United States.

A Mexican judge endorsed on Friday an extradition bid based on cocaine charges in California.

The foreign ministry has less than a month to approve the extradition, which can then be appealed by his lawyers.

Refugio Rodriguez said his client wants to negotiate his extradition with the United States in order to get better prison conditions.

But a US government official has told AFP that no such deals would be made.

The official estimated that the extradition would take place by the end of the year, though Guzman’s lawyer vowed to fight it to keep him in Mexico longer.

Analysts have raised questions about the surprising prison transfer, noting that the Ciudad Juarez was ranked last among federal prisons by the National Human Rights Commission in 2015 and that the city is a bastion of the Sinaloa cartel.