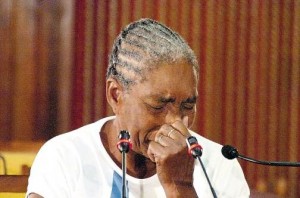 AN elderly woman yesterday gave emotional evidence in the Tivoli enquiry, recounting the killing of her grandnephew and son-in-law by policemen whom she said wrapped their bodies in bedlinen to take them out of her house.
“They slaughter them like a lamb to the slaughter. No one could believe that they would kill them because they didn’t react. They were just so scared. They were just so nervous. Oh God,” 67-year-old Joan McCarthy, her eyes red and filled with tears when questioned by attorney Michael Lorne (representing the Office of the Public Defender).
“I didn’t have a gunman in my house. I can swear for Andre Smith that he was not a gunman. They don’t go anywhere. No matter how close the community centre is, they don’t go over there,” she added.
Earlier in McCarthy’s evidence-in-chief, commission chairman Sir David Simmons had to adjourn the sitting for approximately 20 minutes to allow her to compose herself as she broke down crying.
The reaction in the room at the Jamaica Conference Centre in downtown Kingston suggested that onlookers, too, welcomed the break, after hearing McCarthy’s grief-filled account of the killings that occurred on May 24, 2010, the day police and soldiers entered Tivoli Gardens amid gunfire to capture then Tivoli Gardens don Christopher ‘Dudus’ Coke and restore law and order to the barricaded West Kingston community.
McCarthy’s grandnephew Andre Smith and son-in-law Dwayne Edwards — both in their 20s — were among the 75 people, including a policeman and a soldier, who died on that fateful day that captured international attention.
Her evidence was for the most part corroborated by 58-year-old neighbour Paulton ‘Lippie’ Edwards, the 16th witness to testify at the enquiry at the Jamaica Conference Centre and who was also injured after soldiers shot up his house, he said.
McCarthy said soldiers came to the area and rounded up a group of people, including herself, Smith and Edwards.
The soldier, she testified, started “badmouthing” the people. She said that one of the soldiers said that the prime minister “told us to kill the whole a unno”. She testified that a soldier said if it were up to him he would drop a bomb in the community and “kill down to the suckling pan the breast” and “flatten” Tivoli Gardens.
“Unno think unno can fight soldier and win?” the woman said a soldier commented.
Police, she said, came on the scene around 5 o’clock and two took Edwards upstairs her house, saying that they were going to search the house. The witness said shortly after she heard shots fired and saw them coming down the stairs with his body wrapped in a sheet.
She said she started to cry while saying to Smith, “Dem kill Dwayne! Dem kill Dwayne!
She said two other policemen took Smith upstairs and she heard shots and saw them coming back downstairs with another body also wrapped in a sheet. She said she was unable to identify the body right away because she was pushed inside a house on the block.
She said Smith was supposed to have left Jamaica for America in June of that year to study. She said he had left America two years prior and was living with her.
During cross-examination, she denied suggestions from attorney Valrie Neita-Robertson (representing the Jamaica Constabulary Force) that she didn’t see who shot the young men. The attorney suggested that the men were shot in crossfire, but she denied the suggestion, insisting that they were killed by the police.
Paulton Edwards, in corroborating McCarthy’s account, said the police made his daughter clean up the blood from the stairs.
Questioned by a lawyer representing the Independent Commission of Investigations, McCarthy said, “Dwayne and Andre were not mixed up in anything.”
“If they were mixed up I wouldn’t be here today, because they wouldn’t be around me. I don’t accommodate people like that around me. That’s why I stay by myself and I love my two boys them. Dwayne is from work to home.”
She said the police didn’t find any weapon in her house, adding, “the only weapon they could find is kitchen knife.”
ADVERTISEMENT