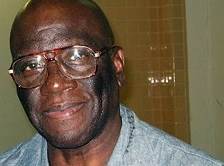 A Louisiana man freed from jail less than a week ago after 41 years in solitary confinement has died, according to his attorney and a close friend.

Herman Wallace, 71, died early this morning in New Orleans at the home of close friend and program director at Tulane’s School of Medicine Ashley Wennerstrom.

“He was surrounded by a whole lot of friends and family in the last few days of his life,” Wennerstrom told ABCNews.com. “He was definitely aware that he was no longer incarcerated and he was happy to be free.”

Wallace left the Hunt Correctional Center in St. Gabriel by ambulance Tuesday evening and was taken to a New Orleans hospital for treatment of advanced liver cancer.

Wallace, who was serving time for an armed robbery conviction, was one of three inmates who were convicted in the 1974 slaying of a prison guard.

The men became known as the “Angola 3” and were moved to solitary confinement, where Wallace spent more than four decades until a federal judge overturned his conviction on Tuesday and ordered his immediate release. Their case was the subject of a 2010 documentary narrated by Samuel Jackson, “In the Land of the Free.”

Wennerstrom said that Wallace was “relatively alert” in the last few days and recognized all of the people who visited him.

“I’d have to write a book to be able to describe what a lovely person he was,” she said. “I know he would want to be remembered as someone who fought for human rights and human dignity.”

“He always thought of himself as a person who was making an extreme sacrifice for a much greater cause, bringing attention to the horrendous injustices that are part of our criminal justice system and someone who was also bringing awareness to the plight of human rights around the world,” Wennerstrom said.

U.S. District Chief Judge Brian Jackson in Baton Rouge ordered a new trial in the case because he said women were unconstitutionally excluded from the grand jury that indicted Wallace in the stabbing death of the guard, which “violated the Fourteenth Amendment’s guarantee of ‘the equal protection of the laws.’….thereby rendering his conviction and resulting sentence unconstitutional.”

“Herman Wallace has been afforded some measure of justice after a lifetime of injustice,” his attorneys said in a statement.

“It is Mr. Wallace’s hope that this litigation will help ensure that others, including his lifelong friend and fellow Angola 3 member, Albert Woodfox, do not continue to suffer such cruel and unusual confinement even after Mr. Wallace is gone,” his attorneys wrote.

Woodfox and Wallace have maintained their innocence in the guard’s killing and have alleged they were targeted because they organized a prison chapter of the Black Panther Party in 1971, which they used to advocate for better prison conditions.

Woodfox was ordered to be released last year, but the state appealed his case and he is still in custody. The third member of the Angola 3, Robert King, was released in 2001 after spending 29 years in solitary confinement.

Wallace’s attorneys said in a statement today that they were honored to represent him.

“Herman endured what very few of us can imagine, and he did it with grace, dignity, and empathy to the end,” the statement said. “Although his freedom was much too brief, it meant the world to Herman to spend these last three days surrounded by the love of his family and friends. One of the final things that Herman said to us was, ‘I am free. I am free.'”