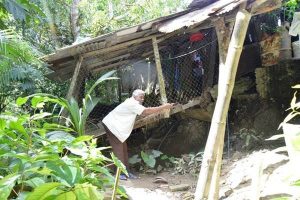 SIX YEARS ago, Ousman Mohammed and his family moved into a duck pen, after their home, built on an embankment, was swept away by the flood swollen Poole River in Rio Claro.

Since then, Mohammed, 68, wife Rajkumarie, 52, their nine year old
grandson and 15 year old grand-daughter, have live in a makeshift shed with a earthen floor near where the home once stood. For the past 30 years Mohammed and his wife have been living at the site,
on land owned Public Transport Service Corporation.

After their house floated down the river, the family moved what remained of their possessions into the coop.

With nowhere else to shelter, they built walls and a roof, and covered the mud with discarded carpeting. Mosquito nets covered three beds placed in one room, among piles of clothing and shoes, books, household items and kitchen utensils.

However, because of the constant erosion of embankment and fear that this home will collapse, Mohammed is seeking help. “This place is getting worse. Little by little it is moving into the river. During the
night we will hear the posts cracking and the place might shift. I am frightened because I need somewhere to put my family”, said the pensioner.

Mohammed said when the rain falls, their yard becomes a thoroughfare for creatures such as scorpions, caimans, snakes and centipedes. “I am scared for the children especially”, said Mohammed.

“Two weeks ago after heavy rains my neighbour called out to me and said a snake was in my yard. It was a big mapepire. That could have killed us”.

The only income for Mohammed and his wife comes from their pension and disability checks. Their grand-daughter attends secondary school and the grandson is in primary school.

Mohammed said he had applied for a certificate of comfort from the Land Settlement Agency (LSA) to occupy the land. The LSA has responded by letter stating that his application was received. The letter stated however that their request will be referred to the Commissioner of State Lands, since the land has been set aside for administration.

“I don’t want anyone to come here and put us out from this shelter. We have nowhere else to go. We need help, if even for the children’s sake”, Mohammed told the Express. Anyone who is willing to assist can contact the Express office at 652-2900 extension 2722, or Mohammed at 306-18