FARMERS HAVE NO MARKET FOR THEIR GOODS

After weeks of toiling in the blazing sun and thousands of dollars spent planting tomatoes and other crops, farmers in Pedro Cross, St Elizabeth, say they have to watch their produce go to waste because they have nowhere to sell them.

Citizens in the predominantly farming community told the Jamaica Observer, during a visit to the community last month, that there is urgent need for an organisation which will ensure that farming is done in a structured way. The absence of such an agency, they said, is to be blamed for the frequent glut on the market.

“The local farmers need some organisation that will create some form of network that will govern the crop they plant, so that we don’t have abundance and scarcity at the same time,” said Antonio Rodgers, who grows crops which include cabbage, cantaloupe, tomatoes and cucumber on his 35-acre farm.

“I am 59 years old and, sad to say, the closest thing I saw to a structure was ADC (Agricultural Development Corporation), and that was when I was 15; so the past 45 years it has been a lot talk,” he said. 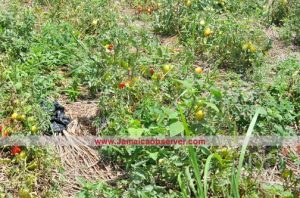 Rodgers was one of two farmers who told the Sunday Observer that their tomatoes were going to waste because of a lack of buyers and also because of the low price for which some vendors want to purchase the produce.
“Persons want to buy it for $20 a pound but it cost more to pick it than to sell it for that price, so I am just going to leave it in the fields,” Rodgers said.

Another farmer, Peter Gardner, who is in a similar position, said he would rather give away the tomatoes for free than to sell them for that price.

When asked how they cope with the constant loss, farmer Ewart Campbell said: “We nuh really think about what we lost. We just call it a loss. Mi have a acre of tomatoes that mi lost and two acres of melons, but mi just ah guh carry it guh feed cow and hog and forget about it.”

According to Rodgers, from time to time farmers have the same problem with different crops because they have no market and because there is no guidance.

“There is three different price at any given time. I sell cabbage for $40 and $30 and somebody curse me off say dem not paying more than $20,” Rodgers said.

The farmers say they need a structured system in place that would assist them in the types and amount of crops they should plant and when.

“We need a structure that tell us how much we need at any time so that all of us don’t go a plant one thing and end up with beetroot and tomatoes, and end up with too much because the market can only take so much,” Rodgers said.

To this end, he said, there should be someone or a farming organisation that would be able to identify what the needs are for the country.

“There is a demand at all time, but someone needs to seek that out and find that out,” Rodgers said.

The St Elizabeth farmer, who has been involved in the business for over 40 years, said the farmers currently credit their produce to vendors and hotels and hope for the best when the time comes for payment.

“The decision we have to make is whether to keep the perishable goods and dem spoil on you or you trust (credit) the man who may pay,” Rodgers stated.

Another farmer, Crosby Bromfield, said that there should be more factories to purchase the farmers’ goods and to ensure that they have stable markets.

“We want a factory where we can deal with watermelons, tomatoes — two main things that we regularly plant. We plant other crops like cucumber and cantaloupe but most of the time dem something deh waste,” he said.

“Three quarter ah time dem waste. Maybe one time out of the year it may sell fi a good price but majority a de time the price is cheap an you can’t pay farmers like that,” he argued.

President of the Jamaica Agricultural Society (JAS), Norman Grant said that the organisation has a new programme in place to address the issues.

According to him, the JAS will be setting up a centralised marketing system which, along with addressing the marketing issues, will also serve to guide the farmers on the amount of crops that they need to farm to supply the country’s needs.

The JAS president said that the organisation, through a $10-million grant from the Universal Access Fund, will be setting up a 20-station call centre at its head office in downtown Kingston to match farmers with buyers. Additionally, he said the JAS will also be partnering with the tourism linkages hub to establish markets for the farmers.

“We are expecting that within a year, when this project is fully rolled out all these constraints will be corrected,” Grant said.

8 thoughts on “FARMERS HAVE NO MARKET FOR THEIR GOODS”