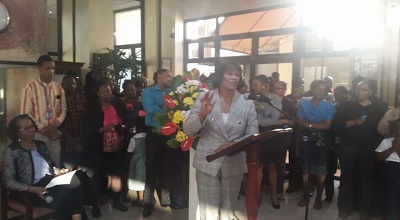 MIXUP-Portia would love to hand over the party to Paulwell but he has too much baggage…and dont be fooled he Paulwell wants it too but knows now is not the right time and his only hope is that someone takes it from Portia and that someone must not be younghence they would have to resign soon which would then give him Paulwell his chance. If a Lisa or Bunting 9r even a Burke was to become president then his goose would be cooked…no hope of being President and by extension PM…suh he is quietly backing Peter P

Portia Simpson Miller may not have played cricket, but exhibited her skills as a bowler at last Sunday’s meeting of her People’s National Party (PNP) National Executive Council (NEC).

It was, in cricket terms, a swinging ball that disturbed the stumps of her long-time colleague, Dr Peter Phillips, who was counting on a verbal agreement with the Opposition Leader’s backers, that she would have laid out a departure timetable and endorsed Phillips as the preferred choice to succeed her after 10 years at the helm of the PNP.

But the wait for the umpire to raise the dreaded finger in signalling that her innings as party leader had ended, was postponed indefinitely as the veteran Member of Parliament for St Andrew South Western announced to expectant NEC members that she would not be walking back to the pavilion just yet.

Secret talks had been ongoing, impeccable Jamaica Observer sources revealed, between some of those close to Simpson Miller, including veteran trade unionist Lambert Brown, communication specialist Sandrea Falconer, and others who were said to be a part of the group touting an alliance between the Simpson Miller and Phillips factions.

The Sunday Observer also learnt that the transition process would see Phillips succeed Simpson Miller as party leader and thereafter Paulwell would become his heir apparent.
The fashioned plan prior to the start of the NEC meeting at the University of the West Indies, was for Simpson Miller to signal to the second highest decision-making group in the party that she would step down by time of the Annual Conference in September, and endorse Phillips as her likely successor, which would have served as a body blow to the other presidential hopeful, Peter Bunting, who has already expressed his intention to become president of the PNP.

That followed discussions between Paulwell, General Secretary Paul Burke, Phillips and other members for a section of Simpson Miller’s speech to the NEC to include her openly endorsing Phillips as the next man with the leadership plan.

The Sunday Observer learnt that Burke communicated the wish to have that information inserted in Simpson Miller’s speech to Falconer for it to be announced during her address to delegates, but it was never done, as Simpson Miller opted against it, as according to some close to her, she did not feel comfortable doing it.

The Sunday Observer was also told that party Chairman Robert Pickersgill urged her not to announce a timetable if her mind did not tell her to.

The development did not go down too well with certain NEC members who were supportive of the plan, and sources said that Phillips and Paulwell in particular were left fuming in the end.

Reports reaching the Sunday Observer were that Phillips, the former Minister of Finance, would have given up his post as party spokesman on finance and planning, as one way of protesting the Simpson Miller snub. Phillips had not done so up to late Saturday and was due to address a meeting of the PNP’s Bridgeport Division in St Catherine yesterday evening.

Unconfirmed reports are that Paulwell left the NEC meeting in disgust before it ended.

“Portia is not endorsing anyone,” one member close to her told the Sunday Observer.

“At age 70, going 71 in December, she is not yet ready to let go. Although she can retire now and get her full pay as a former Prime Minister, which is tied to what the current Prime Minister is getting, it is broader than that, as she does not want to be sitting at home doing nothing. She wants to be still involved in politics and governance and still believes that she has much to offer to the people of Jamaica.”

Another individual who is also close to Simpson Miller said that she does not want to be rushed into giving up the leadership of the PNP, citing the fact that no one pressured former presidents Michael Manley and PJ Patterson into leaving as head of the 78-year-old organisation.

The individual said that she was particularly wary of being pushed to depart the scene, as she felt that she was rushed into calling the February 25 General Election by Phillips and others.

The development came after a vigorous presentation at the NEC meeting by former PNP Vice President Dr Karl Blythe, who demanded that Simpson Miller take full responsibility for the General Election loss and give a timetable for her departure, which sent the meeting into a hush as members tried to digest his bluntness.