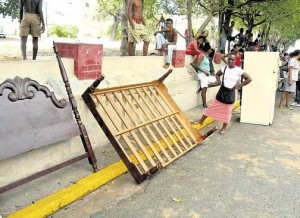 POLICE in the Kingston Central Division are investigating a possible case of arson after a fire yesterday destroyed a building at 87 East Street in downtown Kingston, which formerly housed the Corporate Area Coroner’s Court
The blaze left 40 people, including 15 children, homeless.
Yesterday, angry victims of the fire did not mince words, alleging that the fire started after two men, who frequent the Shoemaker Gully in New Kingston at nights were involved in an early-morning fight.
One of the men allegedly torched a section of the building and the fire spread rapidly, destroying everything in its wake.
“… Dem bruk fight in the morning and then burn down the place,” one irate man alleged in an interview with the Jamaica Observer.
Charmaine Birch was particularly hard hit. The mother of four was in tears as she wondered how her children would face the new school year on Monday as
all their school supplies, uniforms and earthly possessions had been burnt in the blaze.
“Everything fi mi pickney dem back-to-school bun up; nutten me nuh save. How me a go face this now? Me no know how it going go. My fridge, me stove, me bed, me dresser, me TV, me DVD, everything gone. No clothes not on me baby dem back,” the woman said as tears flowed down her cheeks.
“The boy dem tell lie bout them homeless. Them live inna di yard and nobody no trouble dem. We sorry we never ‘done dem’ cause you see how them make everybody a suffer and have to start all over again. Boy me don’t know how me going deal with it,” another man said as he paced the sidewalk on nearby Beeston Street.
Other victims of the blaze stood and looked on in disbelief as firefighters from the York Park, Half-Way-Tree and Rollington Town stations fought the blaze.
Several cars parked in the premises were damaged, one more seriously than others as the owner was not able to remove it before the menacing flames engulfed it.
The police yesterday confirmed that they were interested in questioning two men who they believe could assist them in their investigations into the suspected case of arson.