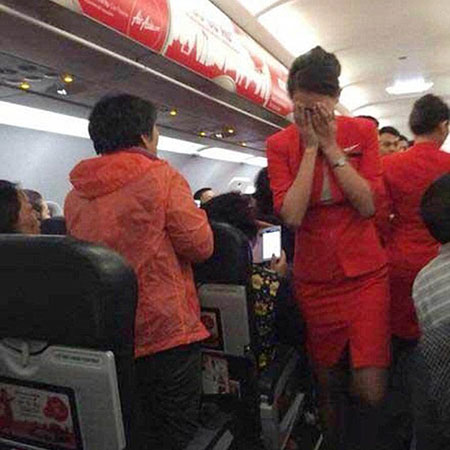 A flight attendant who was treated for burns after being hit with hot water and noodles A couple caused chaos on a flight because they weren’t seated together, scalding a flight attendant with hot water and noodles. One of the unruly pair even claimed to have a BOMB, which was the last straw for the pilot who then turned the plane around. The incident was captured on mobile phones by other passengers that show one of the hostesses touching her face after being scalded as she was hit with a hot dish. She was reportedly given first aid on board by her colleagues to deal with the burns and was taken to hospital after the Thai Air Asia flight turned around and landed back in the Thai capital. The trouble started when the couple boarded the plane and found themselves seated separately on the charter flight from Bangkok to the Chinese city of Nanjing. And even though the seating was rearranged to put the couple together, they were still angry and refused to calm down. The video clip showing the man shouting at staff who are trying to restrain him quickly went viral after it was uploaded on Chinese social media network Weibo. A spokesman for the budget airline said that the plane had been forced to turn round so that the angry couple could be arrested. The decision to turn around had been made after the man claimed to have a bomb and threatened to blow the plane up, the spokesman added. Witnesses say that the man was led off the plane while carrying a young girl although he and the child and his girlfriend were not immediately detained. He claimed that the hostess had been scalded by accident when they had argued with her over the receipt they wanted for the hot water. However after the incident went viral, officials from China’s National Tourism Administration said the tourists had disrupted the flight, hurt other passengers and “badly damaged the overall image of the Chinese people”.
http://youtu.be/yeXlqVkJ2zs