French gymnast Samir Ait Said suffered a horrific leg break while performing in the vault at the Rio Olympics. 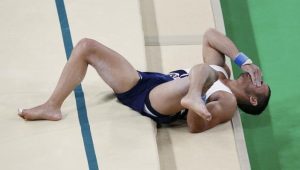 The 26-year-old was taking part in the men’s qualification event at the Rio Olympic Arena.

Said, who competed at the World Championships in Glasgow in 2015, was taken off on a stretcher and acknowledged the crowd as he departed.

2 thoughts on “FRENCH GYMNAST BREAKS LEG DURING PERFORMANCE AT RIO”