Mafioso’s brother Kemar returned to the states and the aftermath of his orgy greeted him. Two of the girls had gotten pregnant and were said to be keeping the pregnancies.
Mafioso started telling his friends, that he was returning to Jamaica on voluntary departure. The streets were saying that he had failed his second immigration interview. A party was scheduled in Jamaica for his return but was cancelled by Mafioso because he was still in the U.S. He was long over the 120 day time-frame that is given by the law to leave.
In late 2011 Mafioso brought his mother Pauline to the U.S and his brother. His friend Sidonie Mcleod, former girlfriend of Dancehall artiste Elephant Man, came to the U.S after living in Canada for a few months. Sidonie was originally set to work at Zip FM’s partner station in Canada, had been complaining about not having enough money, Mafioso invited her over. It is said that Sidonie was not told that she had to do anything until she came to the U.S. By this time, the woman with whom she had left her daughter was now facing problems of her own. The woman was said to be Tony Matterhorn’s ex-girlfriend Toni-Ann. Word on the streets was that; Toni-Ann, after many years of being cheated on returned the favor and it was not taken well. Allegations were that, shots were fired, and Toni-Ann was order to move from the home. Sidonie’s daughter was sent to the country to live with her mother as Toni-Ann’s finances were strained. After not working for many years, she was forced to seek employment in order to survive. Money was now an issue for both women. There is an old Jamaican proverb that says ‘The first water hog ketch him wash’, working for Mafioso was Sidonie’s ‘first water’ in the U.S. She washed. 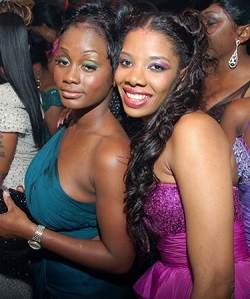 Mcleod was no stranger to the narcotics process and although she had not taken part in it, allegations were that she had a lot of female friends who were involved in low level ‘’drug runs’’. Many of whom seemed to have done their thing and had never been caught. Elephant Man is known for shirking his fatherhood responsibilities, his provision was not an option for Mcleod. She began working for Mafioso, and after some level of comfort, she began partying with the Mafias. Mcleod called Mafioso her brother and it is highly unlikely that they had an intimate relationship because Mcleod was said to have provided Mafioso with a few bed partners who were her friends. She was his official link to ‘Jamaica’s Groupie Ville’. With induction into groupieville it meant the availability of low level ‘drug runners’ and big connections. These young women were involved with men who were connected worldwide!
After not travelling to Jamaica December 2011, Mafioso decided to make much of the time he had given himself in the U.S. Unfortunately by that same December, he came into the information that, a few of his friends were being watched by the United States’ Federal Bureau Of Investigation. Mafioso informed these friends by telephone.

The men that Mafioso was said to have tipped off, were men who ”flew under the radar” and because of their status in the drug trade, they were not ‘’hands-on’’ in the business anymore. They were very cautious about attending public events and often stayed away from taking pictures that would be published on the internet. Two of the men were U.S citizens with degrees and invested the money they had made in the business by buying properties in Jamaica. Some were said to have upscale rental properties in places like Beverly Hills. Allegedly, they were able to access these properties through political affiliations because their incomes were not documented.
In less than one month after Mafioso had warned his friends, the FBI began to close in on the men, their women and properties they had also helped to purchase in the U.S. One of the men who were picked up by the FBI, was an acquaintance of a popular entertainer in Jamaica. He had traveled to Miami from Jamaica after facing bribery charges for attempting to pay off a man who accused the entertainer and his entourage of causing bodily harm. Friends associated with the gentleman, accused Mafioso of informing on him because while partying in Miami, Mafioso took the microphone, and while the gentleman would have wanted to remain low key. Mafioso announced his presence in the party. Authorities were said to arrive shortly before the party was finished. It was said later, that a popular female party goer was the one who kept the FBI abreast of the King Pins in the Jamaican narcotics world.
Los Angeles became Mafioso’s next party stop. The men there kept a low profile when he was in town in fear of being detained but Mafioso’s intent was to solidify his connections before making his exit. Mafioso came back to Philadelphia kept his annual birthday party, and a party for his mother Pauline. His brother Kemar kept his own party for the first time, in late November of 2012. By December Mafioso departed for Jamaica. 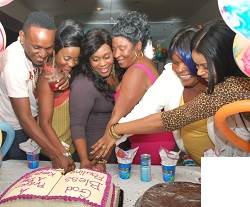 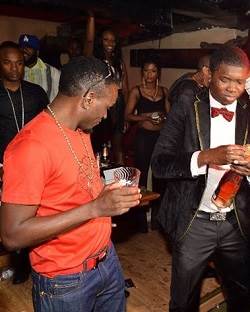 Mafioso took Jamaica by storm by keeping a return party, called up Supreme Promotions and asked for a spot to perform on Sting. He wanted to show Jamaica that he was back with a bang! On one popular TV show when asked about why he returned to the U.S, Mafioso responded by saying that he had left a million dollars in the U.S and returned for it. Contrary to what he had stated on the show, Mafioso was not paid for his performance.
Women all over Kingston flocked the parties he went to. Every woman wanted some of the money he said he had returned to collect. When Marsha made a quick trip to Jamaica that December, wearing a chiffon dress and some Louboutins, there were women inside and outside that were said to be sleeping with Mafioso. A young girl, hoping to get some cash from Mafioso, slept with him and was expecting a wad of cash was disappointed. Sources say that when she did not receive the money, the young woman waited Mafioso was sleeping she made off with a platinum chain that he had. Mafioso was said to have made a few calls urging her to return it. It would seem as if these women were lined up and waiting for Mafioso to land.
On the streets word was out that Mafioso’s friend was holding a grudge against him. A young woman, who was with Bounty Killer some years before, had caught his eye and although she was involved he wanted to sleep with her. Mafioso knew this and pursued the young woman. He was successful. The young woman gave in and word of it got back to the man she was involved with. Sources say that Mafioso sent some of his friends for the guy who was responsible for the news getting out and slapped him in the face. Bystanders said he told the young man with a smirk on his face to stop spreading rumors. Allegedly, Mafioso and the young woman had more than one sexual encounter and he was the one responsible for putting the word out. He wanted his friend to know that he had ‘’won’’.
Many Jamaicans return to Jamaica around Christmas holidays and Mafioso was said to be seen in the company of Robert ‘’Father Doza’’ Willams and Kenzo ‘’English’’ Reid. They partied together over the holidays and while both men returned home each night, it was said that Mafioso was unable to sleep. After heading home to his apartment after each party, he would shower get dressed then spend the day gambling at a casino in New Kingston. The casino took Mafioso from his worries. Some of the young men in prison called that they needed money and there was not enough, they needed money for lawyers and their commissaries. Threats were being sent via coded messages from prison………….
Mafioso’s friend Keno ‘English’ Reid with whom he had rekindled their friendship returned to the U.S and soon after arriving, he was nabbed by authorities. Reid’s charges are still unclear but in the streets sources say; he was sentenced to a total of two years. Within 24 hours of getting the news that English was held, it appeared as if the whole island had heard the news. A few people blamed Mafioso and because of this, he went into hiding. The 10M apartment where Mafioso spent most of his time was abandoned for over a week. He returned when he got a call from the U.S telling him that Marsha, the mother of his children, Kemar his brother and Sidonie Mcleod his friend were all held by authorities.
Without hearing fully how they were nabbed, Mafioso and some of his friends began to blame an associate of theirs who worked for Federal Express.
Things began to look dim because Mafioso wanted but could not get a lawyer to a clear understanding of the charges that the three faced. Nor was he sure exactly how they were nabbed. Sources say he was worried about the mother of his children more than anything and would often call just to vent. Gambling, stress, sleepless nights did not stop Mafioso from partying and pretending as if everything was well with him. ……………….And, maybe it was because reliable sources say, Mafioso contacted a friend on how to get a work permit for Canada and got it! Shortly after arriving in Canada, Mafioso headed for the United States. His first stop Miami, then Los Angeles. Some say that he returned to help Marsha. For sure, Mafioso was told by a close friend who had recently been deported. The friend told Mafioso about the things the men in prison were saying and as soon as he returned to the U.S, he sent them letters that he would begin helping them again financially. Plans of getting back in the game were short thwarted when Andrew ‘’Flippa Mafia/Moggla was picked up by Los Angeles law enforcement on September 16, 2013.