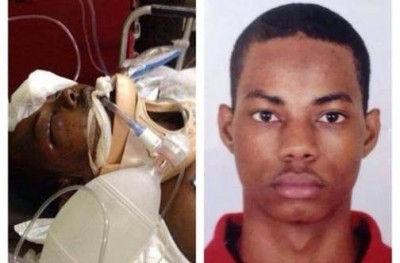 THE family of Mario Deane, already struggling to raise funds to bury their loved one, has been dealt another blow as the funeral home handling the body has refused to use a casket and a hearse that was donated to the family by a popular entertainer.
This was confirmed yesterday by the entertainer, who was adamant that his identity not be published.
“I am so disappointed after I called the people and they told me that they would not accept an ‘outside casket’, which was the choice of the family. It is sad that these people could not choose humanitarianism over money. The family really wanted the casket with his picture on it. I don’t want to be identified as I am not seeking any publicity. This was a gesture from the heart,” the entertainer said.
Deane’s funeral will take place on Sunday at the Cornwall Gardens Seventh-day Adventist Church, but it was still not clear how the family will be paying for the funeral expenses.
Deane died on August 6, three days after receiving a brutal beating while in the custody of the Barnett Street Police. Police had initially told doctors at the Cornwall Regional Hospital that he had fallen off a bed, but changed their story after howls of protest.
According to Deane’s sister, Sadiki Deane, the donation of the casket and the hearse would have relieved their financial stress if the undertakers had not taken the decision to snub the offer.
“That would have lifted a huge weight off us. They told my mother, it’s, [the] policy. We don’t know what to do at this point. We can’t move him, its too late now,” Sadiki Deane said yesterday.
Deane’s mother, Mercia Frazer, was also crestfallen and seemed to have resigned herself to the decision of the undertakers.
“They know I can’t find the money, but I can’t deal with that now. I know people may say I am too easy-going,” she said.
Deane’s relatives had earlier rejected an offer from the Government to assist in financing his burial based on the principle that the State had not accepted culpability for his death.
Meanwhile, a probe into Deane’s death has been completed by the Independent Commission of Investigations (INDECOM) and an announcement on whether or not police officers will be charged is expected soon.
INDECOM commissioner Terrence Williams yesterday began to review the findings of his investigators.
Five officers have been suspended and have undergone an identification parade following the beating death of Deane, who was thrown in jail for possession of a ganja cigarette.
In an interesting twist in the case, the witness who took part in the identification parade, 21-year-old Fahdean Ferguson, escaped police custody minutes after the parade had ended.
Deane’s cellmates Marvin Orr and Adrian Morgan have been charged with his death and will appear in the Montego Bay Resident Magistrate’s Court today.