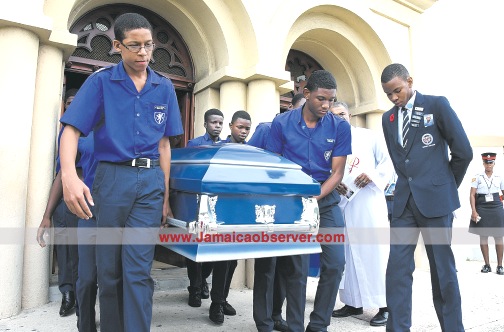 Pallbearers take the casket with the body of their schoolmate, Nicholas Francis, from the Holy Trinity Cathedral after yesterday’s thanksgiving service for his life. (Photo: Michael Gordon)

“How did we get here as a nation? How did we get here where people are so cold?” were questions posed by Father Carl Clarke that resonated most with mourners who yesterday filled the Holy Trinity Cathedral to celebrate the life of 14-year-old Nicholas Christopher Francis.

The ninth grade Jamaica College student was savagely murdered on October 26 on a bus, when he refused to relinquish to a robber what Clarke, his priest, described as a “cheap watch and ‘banga’ phone”.

The police last month reported that after Nicholas boarded the bus, a man tried to rob him of his watch and other valuables. The young JC student was stabbed several times when he resisted his attacker and was rushed to hospital by the driver of the bus.

Quacie Hart was later charged with the murder after he turned himself in to the police days after the incident. Hart was charged by the Centre for Investigation of Sexual Offences and Child Abuse earlier this month for breaches of the Sexual Offences Act. It is alleged that he was involved in a relationship with a minor.

Yesterday, Clarke, in his homily, called for Jamaicans to re-examine our callousness as a society.

Referring to the robbery, Clarke pointed out the ‘value’ of being satisfied with what’s your own, a lesson instilled in him by his mother.

“When I was a boy growing up, in those days coming from a poor family, when wi hungry and the neighbours cooking and the pot smell sweet and yuh mouth start run water and the neighbours would offer you some, and if you had my mother, when dem seh ‘yuh want some?’, di heart say yes! But yuh know seh if yuh seh yes yuh woulda get some lick,” he shared to shouts of agreement.

“As a child growing up, I thought my mother was wicked, because yuh know wi hungry an wi nuh beg the food, dem offer wi, so why wi can’t tek it. But the value that my mother was trying to instil is that we must be satisfied with what you have and what you don’t have, you leave it,” he continued to rounds of applause.

He also lamented that the nation has lost the values of love, help, and taking care of each other.

“We cannot allow another generation to grow up like this,” stated Clarke as he encouraged parents to avoid abdicating their role to teachers.

Stating the popular axiom “It takes a village to raise a child”, he also encouraged adults to aid in the rearing of children, a notion greeted with much applause.

The clergyman also encouraged the congregation to forgive.

But this was met with some defiance as one woman, still seething with anger, whispered: “No, mi nuh ready yet.”

“As we come today to bid farewell to Nicholas, I think many of us are filled with disbelief, filled with anger, can’t believe that this 14-year-old, very quiet, devoted Roman Catholic youth and student of Jamaica College is no longer with us today. So much promise, dreams and aspirations have been dashed asunder because of the brutal slaying of this innocent young man,” he stated.

“There is also a sense of anger within us; the desire for justice and for many, jungle justice still fresh in our minds,” he continued. “Kill him! Kill him! He killed him (Nicholas),” Clarke shouted, mirroring the emotions of members of the congregation, “that’s what’s inside us, [but] my brothers and sisters, my friends, it is within this context of disbelief, rage and anger that I would like to speak the word for you today with the theme ‘Balancing the human with divine’.”

The clergyman then reasoned that though angry, people should depend on God to help them to yield a more compassionate and forgiving reaction.

“There is nothing wrong with our emotions. They are a part of who we are as human beings. God gave them to us. Thus the anger that we feel today is natural anger. An injustice has been meted out to one we love and that’s okay,” Clarke stated.

To Clarke, Nicholas was “a young man who rose to the occasion”.

“There are several times I would call Nicholas and say to him ‘Nicholas, you’re going to pray for the service this morning… and Nicholas, who was very shy, very quiet, never said no. He would look at me in disbelief and then he would say, ‘yes, father’.”

Nicholas was also remembered as a calm individual. His cousin Latoya Deslandes and aunt Patrice Harris Henry spoke of his quiet persona as they shared the remembrance, sections of which were creatively delivered in Spanish.

“Nicholas Christopher Francis was one of the most quiet amongst the children in our family. He was the child who would come into the room and be overlooked. He would be the student that the teacher never had to caution for conduct,” noted Henry, who also teaches at JC.

Described a “silent hero” by his aunt, Nico, as he is affectionately called, was remembered for his passion for technology, family, patties and Supligen. Deslandes explained that so great was his love for patties and Supligen, he was sometimes referred to as ‘Patty man’ and ‘Supligen Man’.

“He could always be found, when missing, by himself in front of the computer,” Deslandes said.

“The fact that he was a technology man was evident at home so much that when his cousins came by after his passing and asked for the WiFi password, nobody else knew it. His beloved aunty said ‘Ask Nico’, and a sad silence fell on the room,” she added as the congregation sighed.

He was also known as “the life” of the African Martyrs of Uganda Roman Catholic Church.

“He was actively an altar server and a youth member and served faithfully every Sunday. He was a man who believed in punctuality and was the first person to be at church. Most Sundays, frequently arriving even before the Eucharistic minister,” Henry recalled of her nephew.

His aunt related that the “responsible teen” was remembered among his friends as the voice of reason, who gave support and genuinely counselled them.

“He shared a very close relationship with several youngsters from his community and it was only after his passing that his father discovered that he would share his lunch money with his friends and always encouraged them to do well in school,” Henry stated.

Though from a lineage of St George’s College old boys – his father, grandfather and uncle – Nico, according to his cousin, was determined to attend JC and was elated when he was placed there.

“The colour blue was his favourite colour, thus making him a true blue, and as the men of JC would say ‘we bleed blue’,” she revealed.

Nicholas’ schoolmates, classmates and the JC family paid tribute to their fallen friend. Acting Principal Wayne Robinson, in his address, reiterated his plan to lead the school forward.

“After October 26 this year, Jamaica College as a family will never be the same. We have been wounded, hurt, grief-stricken, angered, pained by the death and circumstances surrounding the death of Nicholas. It has hurt us to the core. It has shaken our foundation, it has affected every single staff member and stakeholder of the school. A piece of Jamaica College has died with Nicholas Francis,” he said.

Highlighting that Nicholas’ form 3C has now suffered the second death of a student since this year, Robinson lamented that the entire student population has become confused by their anger.

Despite this, he maintained that there will be no retaliation.

“We are ‘College’ men and we are strong, and so we will strengthen up our brotherhood as Jamaica College. We will be our brother’s keeper,” he said.

“I had the privilege of serving as principal when Nicholas came through the gates of JC some three years ago. Full of hope, prepared to make a mark in the school in which he had been placed,” Reid said, echoing the notion that Nicholas was a quiet, calm individual.

“Let us move beyond anger, frustration and fear to action… even as we exercise caution in protecting ourselves and our families,” stated Reid in a commanding voice.

“We cannot allow ourselves to be petrified by fear, otherwise the criminals will succeed in their desire to intimidate the rest of us,” he continued.

The body of Nicholas Francis, “the silent hero”, was laid to rest at a family plot in St Andrew.