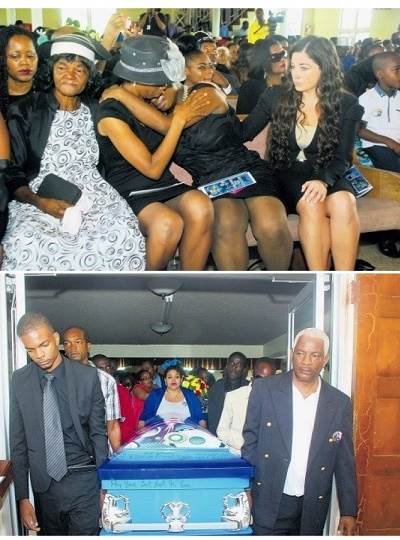 MONTEGO BAY, St James — The calls for justice reverberated from of Mount Salem Seventh-day Adventist Church yesterday, as hundreds of mourners turned out to celebrate the life of Mario Deane, who was beaten to death at the Barnett Street police lock-up last month.
During the four-hour-long service, speaker after speaker stressed the need for an end to injustice in the country and urged the Government to make fundamental changes to the Jamaica Constabulary Force (JCF).
Leading the charge was Deputy Speaker of the House of Representatives Lloyd B Smith, who is also the member of Parliament for Central St James, the constituency in which Deane lived up to the time of his demise.
“We have to ensure it (Deane’s death) does not become a nine-day wonder,” said Smith in his tribute.
He called for a change in the culture of the JCF, arguing that if this is not done, then “we will have more Mario Deanes”. With teary-eyes, Smith emphasised that if Deane were from uptown, he would not have suffered such a fate.
“Let us not use his death to divide us, but to unite us. To help his legacy to last forever you should know your rights,” he told the mourners.
Deane, a construction worker from Rosemount, was taken into police custody while on his way to work on August 3 for being in possession of a ganja spliff. He died three days later — Independence Day — following an alleged beating while he was in the lock-up.
Long before the start of the 11:00 am funeral service yesterday, scores of mourners began to stream into the church, under the watchful eyes of a heavy detachment of police, several of whom lined the road several metres from the place of worship.
At the entrance to the church, scores of mourners viewed Deane’s body nattily dressed in a beige shirt and matching jacket, as it lay prostrate in a blue and white casket with his photograph and name emblazoned on it. Also on the casket, were handwritten messages including: “#Justice for Mario Deane”, “May your soul rest in peace”, and “You will live on in our lives”.
The service began with the playing of the National Anthem, followed by a slew of tributes.
Co-chairman of the Citizens Action for Principle and Integrity (CAPI) Dennis Meadows, in his tribute, stressed that the fight for justice would not end with Deane’s burial.
“We must resolve to take the fight for justice to the point where we are satisfied that the culprits in the force are held accountable,” said Meadows.
He urged the mourners to unite in the fight against injustice, irrespective of which political party they support.
“We must unite because this (the Deane incident) will continue to happen if we fail to unite as a people. When it comes to the issue of human rights and the fight for social justice, put down JLP (Jamaica Labour Party), put down PNP (People’s National Party), and stand up for your rights. Too often the rights of the Jamaican people have been sacrificed on the altar of political interest and political expediency,” he continued.
He argued that the JCF’s culture needs to be changed from “Just us, to Justice,” stressing that CAPI is “not anti-police, but anti-injustice”.
Earlier, Deane’s cousin Diandra Norman described the deceased as someone who had a special liking for the Bible. She said Deane, who attended Rusea’s High School in Hanover and HEART Trust/NTA, was ambitious and always wanted the best for his parents.
“He never like to be a part of any crowd; he was a private person who rarely laughed, but when he did it was a good laugh,” she said.
She noted that her cousin did not have any run-ins with the law, until his arrest on August 3.
In his tribute, attorney-at-law Miguel Lorne — who represents Deane’s family in the pending court case — displayed the items the deceased was carrying in a blue bag when he was accosted by the police.
“These items here showed that the man was well organised and should not have been treated in that manner,” he told the mourners, many of whom cried ‘Justice!’ and ‘Murder!’
Lorne stressed that Deane’s death will not go in vain, and pledged to continue the fight against injustice in an effort to ensure that they will no more ‘Mario Deanes’.
“Mario cannot speak now, but we will continue to speak on his behalf, so this ain’t gonna go away, and that’s why we have brought in an international lawyers and a pathologist,” he emphasised.
Lorne was referring to Dr Michael Baden, a noted pathologist in the United States, and US-based attorneys Benjamin Crump and Jasmin Rand. Crump and Baden were not in attendance at the funeral service, but Rand, who sat beside Deane’s family members in the front pew of the church, pledged to provide support to the family.
She stressed that the international community was fully aware and had heard the cry for justice on Deane’s behalf.
JLP Deputy Leader JC Hutchinson, who spoke on behalf of Opposition Leader Andrew Holness reiterated the call for the establishment of a human rights commission.
Tributes were also rendered by broadcaster Mutabaruka, singer Mackie Conscious, JLP caretaker for Central St James Heroy Clarke, Dr Audley Darmand, and Donna Wedderburn.