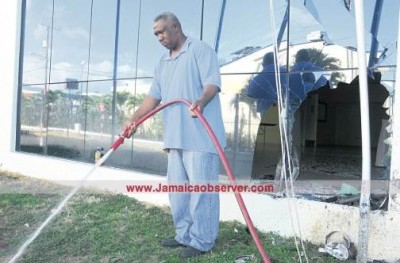 THE body of a former policeman was found with stab wounds in New Kingston yesterday morning, police confirmed.
The police told the Jamaica Observer that around 6:00 am the body was found in a vehicle close to the Courtleigh Auditorium on St Lucia Avenue.
Reports are that the man was attacked at a nearby location and drove away in a bid to escape, but later crashed into a building in New Kingston.
One police source said that detectives were investigating reports that a group of homosexual men attacked the man and stabbed him.
Some sections of New Kingston are known by police to be violent late at night, and numerous attempts have been made to reduce criminal activities, some of which, the police maintain, are caused by homosexual men who are usually present in the area.
There has been, in recent months, a drive by police, as well as councillor for the Trafalgar Division of the Kingston & St Andrew Corporation in which New Kingston falls, Kari Douglas, to rid the area of the homosexual men, some of whom use a nearby gully as their home.