It was no easy task getting to where he is today, but Remone Danhi was determined to succeed.

Now at 30 years old, Danhi is the cruise operations manager at the Mystic Mountain tourist attraction in St Ann.

Many may be surprised that such an outstanding young man was expelled from high school before getting a second chance at success.

Danhi, from Oxford, St Mary, sat both the Common Entrance and the National Assessment Examinations and was placed at the St Mary High School and Tacky High at the same time. 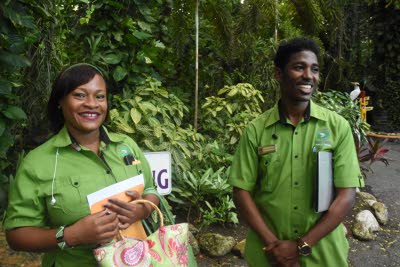 “My mom decided she did not want me to go to St Mary because I had too many friends there,” Danhi said. However, he did not complete his high school years at Tacky High. He soon transferred to Prospect College, a semi-military institution in St Mary. There he was a very active student.
“I played the bugle, I did cook duty because I love to cook,” said Danhi, who was also in charge of canteen duties.

He explained that it was while he was carrying out canteen duties that things took a turn for the worst.

“Some boys stole and I took matters in my own hand,” he said. However, he recalled that this was not solely his action, but that he was advised to do so.

“Some things happen for you to learn from your mistakes,” Danhi, who was among six students expelled from Prospect College, stated philosophically.

“From then I decided if I got in trouble, it will have to be my doing and no one else,” he continued.

He was determined to succeed, inspite of this setback and continued doing the hard work necessary to pass the three subjects he sat in CSEC in grade 10. He passed all.

Danhi started visiting the Brown’s Town High School in St Ann where his aunt worked as a nurse and was soon enrolled as a student at the institution. While there he was an extraordinary student who excelled academically. He left Brown’s Town High with a high school diploma and was awarded for having the best performance in a number of subjects.

After finishing high school, Danhi worked at the institution, trying to raise money for college. He applied to a number of teachers’ colleges as he wanted to become an educator.

“My brother who is an engineer encouraged me to apply to University of Technology, Jamaica” he said. He was accepted to both the UTech and the Moneague Teacher’s College. After working for an additional year, he made the decision to go to UTech where he did business and computer studies.

However, his start at UTech was not the best. The same month he was to start his studies his father died.

“I started school and went back to the funeral…I miss my dad, he was a good man,” Danhi said. The memory of his father also had the effect of motivating him to do well.

Danhi started his career in tourism at the Riu Hotel as a front desk clerk immediately after leaving the University of Technology.

“I applied to Riu because I always wanted to get into the tourism industry,” he said.

“If something is to be it will be. I knew of Mystic Mountain. I had visited the park and had met Miss Thame, the human resource manager, and expressed an interest working here,” Danhi said.

“I totally forgot about it until I was working at Riu and I met Ricardo.” He said he asked an employee who was in sales at Mystic Mountain to take a job application to Mystic Mountain for him. He was soon called for an interview.

“I always admired the tourism industry and wanted to be a part of it… Being at the front desk was not my dream,” Danhi said. However, he said that job allowed him to meet people and to have lasting friendships.

In 2015, he was promoted to cruise liaison officer. Less than a year later, he was given an even bigger portfolio, cruise and sales manager, dealing with logistics and operations.

Despite this accomplishment, Danhi remains humble.

“For me it’s just another step. This is not all for me. The sky is the limit. While I appreciate being in this position, it is all about the challenge and what’s next. Getting the job done is all I am about,” Danhi said.

“Whatever I accomplish, I have to give God thanks and my family for supporting me,” he continued.

“I love a challenge…I don’t think there is anything too hard for me to do. I like to challenge myself,” Danhi said.

“It’s not all a bed of roses. It’s a lot of hard work,” Danhi said, as his position as manager includes working late and working at home.

Danhi, who is a family person, is not bothered by this and intends to give his best at all times.