Having shed tears for her country during her battle for the bronze medal in the 100m on Saturday last, Shelly-Ann Fraser-Pryce is ready again to battle the pain barrier for the better glory of Jamaica.

Fraser-Pryce put on a brave face and smiled when she was introduced to the stadium for the semi-final of the 100m. Yet no one could imagine the pain she would bear over the next 10 seconds.

Decked in her green and gold hair, the ‘Pocket Rocket,’ as she is popularly called, left the blocks like a bullet, throwing everybody off their form as they tried desperately to catch her.

They didn’t, as Fraser-Pryce won her semi-final in 10.88 seconds. In that race she totally destroyed the confidence of one of Jamaica’s biggest threat, Dafne Schippers. The Dutchwoman never recovered.

Fraser-Pryce walked back, her head and shoulder held high. She is the proud defending two-times champion. She had to be strong.

But she could not hold it anymore; she grimaced in pain. The pain from her injured toe was once again proving unbearable.

“It was really difficult. I cried because it was really unbearable, but I knew, I had one more race to go and I just prayed and said, ‘God, if it’s to be, it will be,’ and I am really happy,’ she revealed.

Fraser-Pryce was third in the 100m final won by her good friend and training partner, Elaine Thompson, in convincing fashion. The ‘Pocket Rocket’ fought bravely, and secured the bronze in 10.86 seconds. 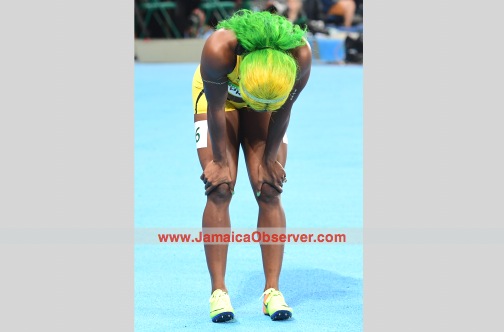 Despite the pain, she is not about to quit on Jamaica now and will put herself through it once again for the love of Jamaica.

“After the Olympics is finished, I will have some consultation with the doctors, but I am just looking forward to the relays and, hopefully, I will be able to show up and give my team two solid legs,” said Fraser-Pryce.

She was chasing history as the first woman to win three consecutive 100m Olympic titles, but she was beaten by Thompson and had only positive words for her conqueror and will not blame defeat on her injury.

“It’s part of the journey as an athlete. There are many times you will have 60 per cent, you will have 100 per cent. I am just really happy and all the glory goes to God for everything that has happened, and I am blessed because I have accomplished so much and I am happy,” she concluded.