Elaine Thompson just knew that she would become a successful athlete.

According to her grandmother, Hycenth Ricketts, Thompson, after leaving Manchester High School for the University of Technology, Jamaica (UTech), uttered the following words to her that have proven most prophetic: “If I don’t mek it by my hand, mi a go mek it by mi foot.”

On Saturday night, the girl from Banana Ground, a quiet community in the hills of Manchester in central Jamaica, lived up to that promise by beating a quality field to win gold in the women’s 100m at the Olympic Games in Rio de Janeiro, Brazil.

The first-time Olympian, who has the world’s fastest time of 10.70 seconds this season, pulled away from the field to emphatically win in 10.71 seconds, ahead of American Torie Bowie (10.83), and the ‘Pocket Rocket’ Shelly-Ann Fraser-Pryce, who finished third in 10.86 seconds. 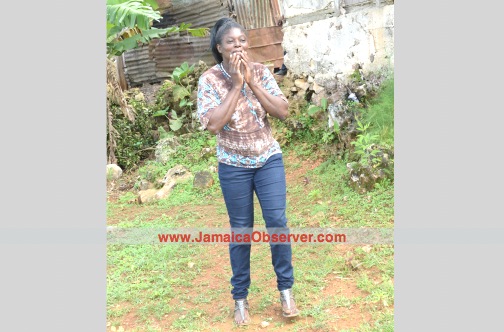 Although Thompson was ecstatic about the victory, she was also obviously very emotional, as she hugged Fraser-Pryce, her fellow Jamaican and MVP club mate, before both posed with Jamaica flags and acknowledged the cheers from appreciative fans inside the Maracana Stadium.

Yesterday, when the Jamaica Observer visited Banana Ground, the sprinter’s family told us that the community was abuzz with excitement Saturday night.

“It was joy, man. If you ever see up so last night (Saturday night), everybody was there,” the 68-year-old Ricketts said, pointing in the direction of the square. “She don’t let down the community, and moreover, every time she talk she seh she come from Banana Ground, and I am very proud of that.”

Residents, she said, were joined by member of parliament Peter Bunting to view the event on a big screen provided by Thompson’s sponsors, National Commercial Bank.

Shortly before the race, “Vinnette”, as Thompson is affectionately known to her family, contacted her cousin, Kemara Graham, via WhatsApp.

Graham then said Thompson asked her to make a video recording of the crowd and assured her that she was “fit like fiddle” and confident of victory.

“She is a nice girl. She is my third grandchild,” Ricketts told the Observer. “She did sweet, man, and love nice food, because when she come from school the best way you can get her to do something for you was to give her some Soursop juice.

“She always a talk bout running, and when she a leave Manchester [High] school she seh ‘Mama, mi nah stay here with you because I have to go out there to go pon mi foot.’ So I am very proud of her, and I wish her all the best,” the grandmother shared.

According to Ricketts, Elaine started showing potential during her early days at Garlogie Primary School, as she aspired to become like the legendary Jamaican sprinter Merlene Ottey.

Last year, having rose to prominence, Thompson was considered the island’s next big name female athlete, after she became the second-fastest Jamaican woman over 200m — behind Ottey — when she clocked 21.66 seconds to take the silver medal at the IAAF World Championships in Beijing, China.

“From she a go primary school she usually go round by Kirkvine go run, and it was from that time we knew that she was going to make us proud. So mi feel good fi know seh mi tek her from that tender age and she don’t let mi down,” Ricketts told the

According to the grandmother, Thompson, as a single child, was always focused on succeeding in school, as she was determined to help her mother, Rose Richards, who has financial challenges.

Richards now resides in a one-room dwelling with her physically challenged mother.

“The last time I spoke to her I told her to focus on her education because she is going to have to take her mother out of poverty,” Richards related.

“She said ‘Mama, mi a nuh idiot’, and I said ‘Yes, girl’. I am very proud, it doesn’t matter if she doesn’t give me anything, as long as she takes care of her mother,” Ricketts said.

As a woman of faith, Ricketts added that she was preparing herself to pay tithes and seek the Lord’s divine intervention so that He could “oil Elaine’s foot one more time”, with the 200m and the 4x100m relays still to come.

Now that the 24-year-old athlete has made her mark in global athletics, she will likely be able to realise her dream of helping her 40-year-old mother.

The soft-spoken Richards was overwhelmed when reflecting on her life’s journey.

“I feel really good. I talk about her [Elaine] a lot and I always hoped that she would have made me proud, and she has now done that. So this means a lot to us, knowing how far we are coming from,” Richards said as she wiped tears from her eyes.

Elaine’s father, Keith Thompson, who had a copy of yesterday’s

Sunday Observer reporting on his daughter’s victory, was elated.

“I am a little surprised because wi know seh is a competition, and wi know it was going to be a challenge. But wi know she wanted it and she worked hard for it, and wi give thanks and feel proud seh she got it,” he added.

“This is a good upliftment fi the family and she mek mi feel even more proud as a father. She always humble, quiet and determined to achieve her goal of being like Merlene Ottey, and God has now blessed her and she is now on the right path. Wi just hope and pray fi she stay focus and put herself together and do the best she can in good health,” he said.

During the interview, Elaine’s 85-year-old great grandmother Ewan Palmer, who resides in England, joined in the celebration via telephone.

“I was not feeling well, but I am not too bad today (yesterday). I was always looking forward to it because I know that she is very good. I don’t know when I am going to see her, but I am so proud of her, and other family members here are also happy for her,” said Palmer.