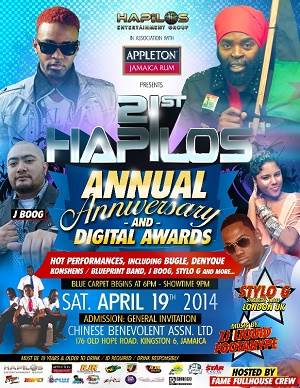 HAPILOS ENTERTAINMENT GROUP HOSTS AWARDS SHOW
21st Hapilos Digital Distribution Inc. will this year be celebrating 4 years of great success. With their client base expanding, 21st Hapilos Digital is set to give back at the 21st Hapilos Annual Anniversary and Digital Awards show. This show is set for Saturday, April 19th, 2014 and will feature the presentation of over 30 awards along with performances from the ‘Gal a Bubble’ deejay Konshens, the ‘Anointed’ Bugle, ‘Make Me Believe’ songstress Denyque, the “Lets Do it again” singer J.Boog and Stylo G from London UK. “This show is our way of awarding those artiste and producers who have worked tirelessly on their music” shared Hapilos, President of Hapilos Entertainment Group.

The blue carpeted event, promises to be a great success featuring title sponsors Appleton Jamaica Rum. Hapilos further adds that with Appleton’s input this year’s staging of the awards will be far more elaborate and formal than the past award shows; “We pride ourselves in knowing that we have grown so much over the years so this ceremony also acts as a celebration of the work done by our company”.

Admission to the awards is a general ticket which can be won on several Appleton Jamaica Rum and 21st Hapilos social media platforms or from one of many media sponsors affiliated with the event. “If you did not win a ticket online, the 21st Hapilos Annual Anniversary and Digital Awards show will be streamed live on both Appleton Jamaica Rum and Hapilos Entertainment Group’s Facebook Fan Page for all to see” added Hapilos, “this show promises to be very entertaining and filled with surprises”.

The 21st Hapilos Annual Anniversary and Digital Awards show will be held at the Chinese Benevolent Association Ltd; Blue Carpet begins at 6:00 p.m with host Deborah Bissoon. Showtime will be at 9:00 p.m, hosted by the Fame Full House Crew. Photography by Ishango.