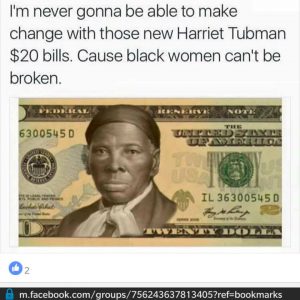 The changes are part of an effort by the Obama administration to put a woman on paper currency and Lew said that along with Tubman becoming the face of the $20 bill, images of women and civil rights era leaders will also be added to bills.

“We are putting a woman on the 20, the 10, and the 5 and we are going to move as quickly as we can get all of these bills out there,” Lew said in an interview with ABC News.

The new designs will start to go into effect in 2020, the centennial of the passage of the 19th Amendment that gave women the right to vote.

Harriet Tubman: What to Know About the New Face of the $20
Why the Government Is Redesigning the $10 Bill
The Obama administration had earlier announced plans to put a woman on the $10 bill, but the renewed interest in Hamilton, the nation’s first treasury secretary, pushed the government to abandon that idea and instead target the $20 bill for a redesign.

“This is I think an outcome that Hamilton supporters can be pleased with,” Lew said.

Hamilton, who has been featured on the $10 bill since 1929, has recently risen in popularity due to the hit Broadway musical that bears his name. The play’s creator, Lin-Manuel Miranda won the Pulitzer Prize for drama this week. Miranda put pressure on Lew to keep Hamilton on the front of the bill, and Tweeted about a one-on-one meeting they had last month.

But not everyone is pleased with Lew’s decision.

A number of high-profile women today penned an open letter to the secretary asking him to select a woman for the $10 note because a redesign of the $20 bill will take longer to complete, possibly up to 10 years.

“As a country, it is about time we put our money where our mouth is in the fight to support women,” states the letter signed by, among others, Ellen DeGeneres, Katie Couric and Gloria Steinem.

They also argued that the interim plan to have a woman included on the back of the $10 bill is more an insult than a compromise.

“Could there be a better metaphor for the second-class status that continues to limit our girls?” the letter reads.

Lew defended the decision, pointing out that more images of women will now be shown on bills than earlier planned.