HAS NOT BEEN WRITTEN BY THE OBSERVER- NEEDS CONFIRMATION 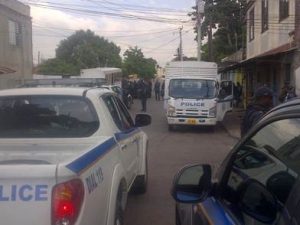 KINGSTON, Jamaica — The Police high command Thursday morning sought to assure law abiding residents of Denham Town that they had nothing to fear in light of a massive operation being conducted in the community.

Two men were shot and killed in an early morning police raid targetting sections of West Kingston and at least ten people so far taken into custody.

Reports are that over 300 members of the Security Forces have cordoned the tough inner city community.

“The police have been in the area carrying out a series of operations and want to assure law abiding citizens that they have nothing to fear,” said a senior officer on the ground.

As many as 20 people have been shot dead since the start of the year in an ongoing gang feud in the community, Member of Parliament Desmond McKenzie said recently.